The Federal Reserve has officially begun the US “exit strategy” from its emergency economic support measures of the past two years, raising the rate at which American banks can borrow money. 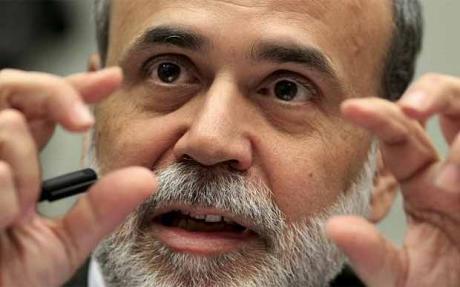 Ben Bernanke – it is first time one of the “big three” central banks has tightened policy since the crisis began Photo: AP

The US central bank, chaired by Ben Bernanke, raised the so-called discount rate from 0.5pc to 0.75pc at the request of its 12 regional member banks.

The move is highly significant, marking the first time one of the “big three” central banks has tightened policy, rather than merely mooting it, since the crisis begun. Although Mr Bernanke had flagged it as a possibility a week ago, saying that he would consider such a move “before long”, the decision caught some investors by surprise, with Dow futures falling 65 points to 10,310, coming as it did after normal market hours, and unconnected to a scheduled meeting of the Federal Open Markets Committee (FOMC).

The change was the first move in US interest rates since December 2008, when the Fed lowered the discount rate – the price at which banks emergency money from the Fed – to 0.5pc and lowered its main federal funds interest rate to a range of 0-0.25pc.

However, since the decision will not directly affect the main Fed funds rate, it is unlikely to feed through directly to consumers.

The increase widens the spread between the Federal funds and the discount rate to half a percentage point, the upshot of which will be to encourage banks to borrow from the short-term credit markets rather than using the Fed – until this decision the cheapest source of short-term funding.

In its statement, the Fed said the changes “are not expected to lead to tighter financial conditions for households and businesses ” and should not be viewed as any change in the economic outlook. However, they will inevitably be seen as a precursor to moves to raise interest rates more broadly in the future

The Fed also said that the typical maturity period for lending from the discount window would be overnight, as was traditionally the case, rather than the 30 day window put in place at the start of the crisis.

The discount window played a key part in combating the liquidity crisis. US banks borrowed as much as $110.7bn (£71.3bn) at the height of the crisis in October 2008, compared to just $200m before it began in the Autumn of 2007.

“The Fed can talk all day about how the discount rate hike is technical and not a policy move, but the market sees it as a shot across the bow,” said Chris Rupkey, chief financial economist at Bank of Tokyo-Mitsubishi UFJ in New York.

Aaron Kohli, strategist at RBS Securities, said: “This is more a case of normalisation, rather than a precursor to a change in monetary policy.”