Tens of thousands of vulnerable dementia patients are being prescribed ‘chemical cosh’ drugs in hospital wards in a ‘scandalous abuse’ of the elderly, ten leading health organisations have said in a letter to The Daily Telegraph. 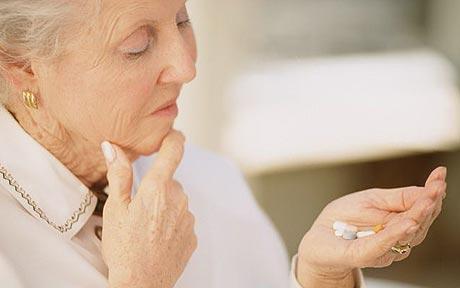 Three quarters of nurses have seen people with dementia in general wards in hospital prescribed antipsychotic drugs that are known to double the risk of death and triple the risk of a stroke in these patients, research has shown.

It is the first time the scale of the abuse in hospital wards is exposed, following warnings that 100,000 dementia patients in care homes are prescribed the drugs leading to the deaths of 23,000 a year.

Ten leading charities, carers groups and experts have written to The Daily Telegraph saying: “We cannot stand by while this scandalous abuse of vulnerable citizens continues.”

Neil Hunt, Chief Executive of Alzheimer’s Society said: “The massive over prescription of antipsychotics to people with dementia is an abuse of human rights, causing serious side effects and increasing risk of death. These powerful drugs should only be used in a small number of cases. The Government must take action to ensure that these drugs are only ever used as a last resort.”

They have called on the government to publish its long-overdue review of the use of antipsychotics which ministers promised would be out in May of this year.

Rebecca Wood, Chief Executive of the Alzheimer’s Research Trust, said: “While the Department of Health prevaricates, thousands of people are being put at risk through the misuse of antipsychotics.”

There are 700,000 people in Britain with dementia and the numbers are rising rapidly.

Antipsychotics have a sedative effect and are not licensed for use in dementia but are prescribed when patients become agitated or difficult and often then are left on them for long periods.

A survey by the Alzheimer’s Society of over 1,000 nurses and nurse managers working on general wards in hospitals found more than three quarters said antipsychotics were used always or sometimes and one quarter said that the drugs were used inappropriately.

Mr Hunt said the numbers of patients prescribed the drugs in hospital is likely to be in the order of tens of thousands.

The letter to The Daily Telegraph reads: “100,000 people with dementia in care homes are being inappropriately prescribed a damaging chemical cosh of antipsychotic drugs and new research suggests that there is a significant problem in hospitals too.

“Antipsychotics should only ever be a last resort. This over prescription is abuse and it must stop.

“The government must urgently publish its plans to tackle the overuse of antipsychotics. These plans must deliver better support for people with dementia and those working with them as well as cracking down on inappropriate prescribing practice.

“We need to make good care the norm and move away from resorting to dangerous drugs which can increase confusion and the risk of premature death. We must all work together to improve dementia care.

“We cannot stand by while this scandalous abuse of vulnerable citizens continues.”

Earlier this year, a study published in Lancet Neurology found that antipsychotic drugs double risk of death for many patients if used over a three year period. A second study, using the records of six million people, published by the British Medical Journal online found antipsychotics tripled the risk of stroke in dementia patients.

Around 100,000 people with dementia are routinely prescribed antipsychotics in UK care homes. This could mean 23,500 people dying prematurely, according to a 2008 report by Paul Burstow MP.

Ms Wood added: “After so many delays, the government must take swift and decisive action.

“Alzheimer’s Research Trust scientists at the Institute of Psychiatry are investigating alternative safer means of reducing agitation among dementia patients. We must urgently develop safe and effective treatments for people with dementia.

“By breaking its promise to take prompt action on the misuse of antipsychotic drugs the government is failing the most vulnerable people in our society.”

On April 1st this year Phil Hope, health minister, told the House of Commons: “I am pleased to be able to tell the House that the antipsychotics review will be completed shortly: that is, in May this year.”

The review is yet to be published.

Dr Dave Anderson, chairman of the Royal College of Psychiatrists’ Faculty of Old Age Psychiatry, said: “This is symptomatic of a health and care system ill designed for people with dementia, yet, 30 per cent to 40 per cent of older people admitted to a general hospital will suffer from dementia.

“The staff in general hospitals need access to dementia training and advice from a specialist liaison mental health team for older people if we are to eradicate this problem.”

A spokesman for The Royal Pharmaceutical Society of Great Britain said: “Pharmacists recognise that once treatment with an antipsychotic has started it will often be continued when a patient is admitted to hospital, and that it is not surprising that hospital nurses also see an overuse of the medicines.

“The role of our profession is to oversee the appropriate use of medicine.”

Dr Peter Carter, head of the Royal College of Nursing said: “This snapshot survey does not suggest that hospitals are awash with antipsychotic drugs.

“It is important to realise that the majority of nurses say these are occasionally used and a quarter agree this is inappropriate. However, these are powerful drugs, and as with all strong drugs the side-effects can be dangerous.

“The important thing is that all staff administering these drugs should receive appropriate training, education and support – this will help them provide the highest standard of care for older people.”

A spokesman for the Department of Health said: “The government commissioned an independent review of prescribing antipsychotics to people with dementia and this is now being peer reviewed in the usual way.

“We expect to publish the review together with the Department’s response, shortly.

“This is an important issue which directly affects the experience of people with dementia in all care settings and we want to make sure that we get it right.

“People with dementia should only be offered antipsychotics if they are severely distressed or there is an immediate risk of harm to the person or others.”

And all those drugs from Big Pharma have one thing in common:

They don’t work, but they do destroy your health.

Even if Big Pharma promises you a million times that their drugs are adequately tested, then I can assure you, that all those studies are complete fraud. I know it.

– AstraZeneca Paid $500,000 to Psychiatrist For Testing Seroquel on Patients