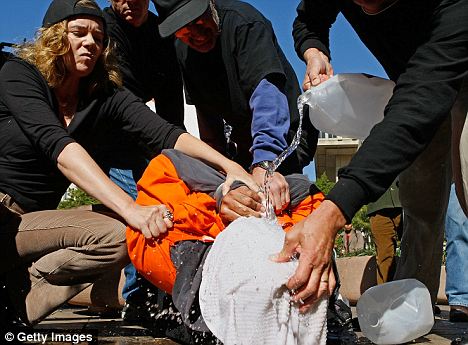 The practice of waterboarding has been used by the CIA to break Al Qaeda suspects at Guantanamo Bay and at secret prisons.

Detainees, including the mastermind of the 9/11 terror attacks Khalid Shaikh Mohammed had water poured over their face until they feared they were about the drown.

President Barack Obama has since outlawed the practice.

Tabor, a soldier at a base in Tacoma, Washington, flew into a rage after his daughter was unable to recite her ABC’s.

As his girlfriend looked on he grabbed the child and placed her on the kitchen counter before submerging her face upwards into a bowl of water.

Police Sgt Rob Carlson said the punishment was carried out because the girl would not recite the alphabet.

When police spoke to the girl they noticed she had bruising on her back and scratch marks on her neck and throat.

When asked how she got the bruises, the girl replied: ‘Daddy did it.’

During a police interview Tabor admitted holding his daughter underwater.

Police initially came to arrest him after he’d been seen walking around the neighbourhood wearing his Kevlar helmet and threatening to break windows.

Officers only found out about the alleged waterboarding when they went to Tabor’s home.

He has been charged with second degree assault and ordered to remain on his army base with no contact with his daughter or girlfriend.

The child has been taken into care by social workers.