This is not a joke! 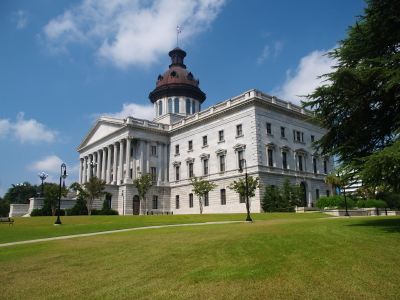 Five-dollar registration fee for persons planning to overthrow US government

Terrorists who want to overthrow the United States government must now register with South Carolina’s Secretary of State and declare their intentions — or face a $25,000 fine and up to 10 years in prison.

The state’s “Subversive Activities Registration Act,” passed last year and now officially on the books, states that “every member of a subversive organization, or an organization subject to foreign control, every foreign agent and every person who advocates, teaches, advises or practices the duty, necessity or propriety of controlling, conducting, seizing or overthrowing the government of the United States … shall register with the Secretary of State.”

By “subversive organization,” the law means “every corporation, society, association, camp, group, bund, political party, assembly, body or organization, composed of two or more persons, which directly or indirectly advocates, advises, teaches or practices the duty, necessity or propriety of controlling, conducting, seizing or overthrowing the government of the United States [or] of this State.”

A PDF of the registration form can be found here, courtesy of FitsNews.

The law also gives subversive organizations “subject to foreign control” 30 days to register with the state after setting up shop in South Carolina.

While the intention of the law is apparently aimed at Islamic terrorists, it’s unclear in the law’s wording whether it can be applied to right-wing militias, some of whom have reputedly called for the overthrow of the US government. The law states that “fraternal” and “patriotic” groups are exempt from the law, but only if they don’t “contemplate the overthrow of the government.”

While the law is clearly redundant — there are plenty of statutes at the state and federal level through which terrorists can be prosecuted — it reflects a not-uncommon pattern in some states of “doubling down” against particular crimes.

For instance, South Carolina is among those states which require drug dealers to declare their illegal income, or face additional criminal penalties on top of the already established penalties for buying, possessing and selling drugs.

The South Carolina blog FitsNews describes the new law as “bureaucracy for terrorists.”

“In the long and storied history of utterly retarded legislation in South Carolina, we may have finally found the legal statute that takes the cake for sheer stupidity, which we think you’ll agree is saying something,” the unsigned blog posting scathingly commented.