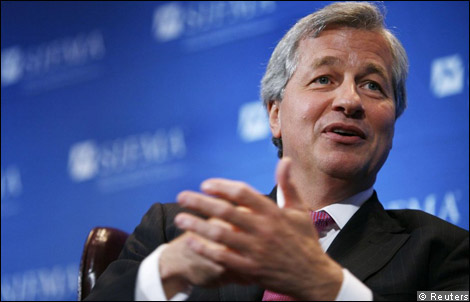 (Financial Times) — Jamie Dimon, JPMorgan Chase’s chief executive, on Thursday received shares worth about $10m after exercising 10-year-old stock options, just days before he was due to be granted a 2009 pay package estimated at $15m-$20m.

The level of 2009 pay for Mr Dimon, whose bank has outperformed many rivals in the aftermath of the financial crisis, could set a benchmark for other Wall Street banks at a time of heightened public scrutiny of bankers’ remuneration.

At Goldman Sachs, which has become a lightning rod for criticism of the industry, several executives said that they expected Lloyd Blankfein, chief executive, to receive a similar bonus of about $20m in stock and options.

A pay package of about $20m would represent a significant decrease from the record $68m in cash, stock, options and pension Mr Blankfein received in 2007.

People close to the situation said that Mr Dimon had no intention of selling the 250,000-plus JPMorgan shares received on Thursday after exercising his options. The stock was worth about $9.6m at Thursday’s closing price.

Mr Dimon, who has sold no shares in the bank he has run since 2005 other than for tax purposes, had to exercise the options as they were due to expire in March.

The stock award comes in the midst of a public outcry at bankers’ pay, with politicians and unions waiting to hear how much Wall Street chiefs such as Mr Dimon and Lloyd Blankfein of Goldman Sachs will get paid for 2009.

JPMorgan and Goldman have emerged as winners from the crisis on the back of a rebound in capital markets that was fostered by governments’ huge injections of liquidity into the financial system.

Their shares have rallied in the past year while their profits surged. Goldman’s shares are up more than 70 per cent over the past 12 months, while JPMorgan’s stock has gained nearly 60 per cent.

Goldman’s share price and its record profits for 2009 have deepened the controversy surrounding the bank. Critics argue that its close ties to governments and widespread presence in capital markets enabled it to derive disproportionate benefits from the rescue of the banking sector. JPMorgan declined to comment but industry observers expect Mr Dimon to receive a package of $15m-$20m, all in stock, for 2009. Mr Dimon is likely to forgo a cash bonus for the second year running.

JPMorgan is expected to announce pay packages for top executives in the next few days.

OPT CUT The stock award Mr Dimon received yesterday dates back to options granted when he was at Bank One, the Chicago lender he ran before its merger with JPMorgan in 2000.OPT CUTMr Dimon is set to receive similar awards in the next few years.

By Francesco Guerrera and Justin Baer in New York