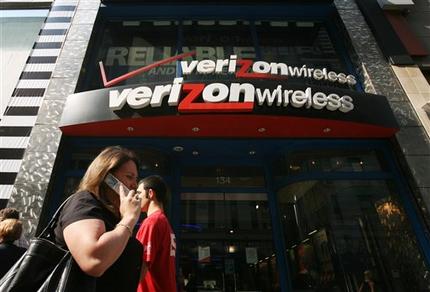 Jan. 26 (Bloomberg) — Verizon Communications Inc., coping with subscriber losses at its fixed-line phone business, plans to cut about 13,000 jobs at the division this year after posting fourth-quarter revenue that missed analysts’ estimates.

The cuts will follow reductions of a similar size last year, Chief Financial Officer John Killian said on a conference call today. This year’s eliminations equal to 11 percent of the staff at the unit, which had about 117,000 workers at year-end.

“The economy, first and foremost, we really see no signs of improvement there,” said Baltimore-based King, who advises investors to buy the shares and doesn’t own any. “I would have expected to see a little bit more signs of stabilization in the fourth quarter.”

Sales to global enterprises declined 4.5 percent from a year earlier. The company has said that its fixed-line unit will recover alongside the unemployment rate, which reached a 26-year high in October, according to U.S. Labor Department data.

Consumers also appeared to cut back. Verizon added 153,000 subscribers each to its FiOS Internet and TV services, missing the 225,000 forecast by Todd Rethemeier, a New York-based analyst at Hudson Square Research.

Earlier this month, Verizon said 2009 earnings per share fell as much as 15 cents, signaling that fourth-quarter profit missed analysts’ original estimates. The company coped with a higher pension expense and subsidized phones for new customers.

“It could be a while before there’s any uptick in the trend in enterprise, and we’re starting the year with a price cut in wireless,” said Craig Moffett, an analyst at Sanford C. Bernstein & Co. in New York, who rates Verizon “underperform” and doesn’t own the shares. “2010 looks like it’s going to be another tough year.”

Verizon is focused on building up the wireless business, which accounts for more than half of revenue. The company is adding new devices and cutting prices for some of its plans to encourage customers to buy subscriptions for data use. Verizon is the largest U.S. wireless-phone carrier and is second to Dallas-based AT&T Inc. in total phone customers.

Growth in devices such as a tablet computer that Apple Inc. is expected to unveil tomorrow should drive growth industrywide, Killian said in an interview today.

“It will attract more and more data customers, more and more usage over the network,” Killian said. “Devices like that will be, long term, very positive for the wireless industry.”

To contact the reporter on this story: Amy Thomson in New York at athomson6@bloomberg.net