– Haiti Earthquake: Law And Order Breaks Down; Who’s Running Haiti? No One, Say The People 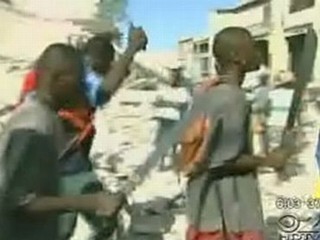 Gangs of men armed with machetes were seen looting parts of Port-au-Prince, Haiti on Jan. 14, 2010.

PORT-AU-PRINCE, Haiti (CBS) ― The earthquake aftermath has brought out the best and worst of the people of Haiti.

Much like the days after Hurricane Katrina, looting has become a problem very quickly.

The looting appears to be isolated to Port-au-Prince’s old commercial center. It’s an area that under normal circumstances would be filled with many shops, markets and a few homes. But on Wednesday it was a completely different scene.

Some of the buildings were on fire. Smoke was everywhere and there were bodies in the streets, many just quake victims lying where they were when the magnitude 7.0 blast hit.

What made the situation that much more tense was sightings of gangs of young men with machetes. On Wednesday they were seen getting into stores and taking all the supplies they could carry. The armed men were seen marching up and down the streets with machetes raised and the competition among the gangs turned quite fierce.

Fights between gangs were seen on the streets. Machetes were flailing and it was impossible to predict what would happen next.

There was no sign of police or any kind of law and order.

Haiti is the poorest country in the Western Hemisphere. Food is often scarce. Now, with this tragedy, desperate people are doing whatever they have to do to eat. People were seen going into stores and rubble and taking anything they could find with them for their trip back to wherever they were camping out.

There was not a single sign of relief on Wednesday. No workers, packages or bottles of water have arrived from relief agencies. There was just nothing.

And with no running water or electricity, people are getting hungry and thirsty.

The situation is dire.

If you have family in Haiti and are having trouble reaching them, the state department can help. It has set up a hotline for Americans looking for relatives there: 1-888-407-4747.