– Who’s running Haiti? No one, say the people (Reuters):

PORT-AU-PRINCE (Reuters) – Desperate Haitians turned rubble-strewn streets and parks into makeshift hospitals and refugee camps on Thursday in the absence of any noticeable response from authorities in Haiti after Tuesday’s earthquake.

With the 7.0 magnitude earthquake collapsing the presidential palace, a string of ministries and the headquarters of the U.N. peacekeeping mission in the country, Haiti faces a dangerous vacuum in security and government.

The Caribbean nation of 9 million people, the poorest in the western hemisphere, has a turbulent history of conflict, social turmoil, dictatorship, fragile institutions and devastating natural catastrophes.

Many in the capital Port-au-Prince picked away at shattered buildings with bare hands, sticks and hammers hoping to find loved-ones alive. Thousands of homeless people began to set up their own camps anywhere they could, the biggest right opposite the collapsed presidential palace.

“Look at us. Who is helping us? Right now, nobody,” said Jean Malesta, a 19-year-old student who was the only survivor when her apartment building collapsed from the powerful quake that has killed thousands, possibly tens of thousands.

She and a dozen others lay under a tent they had set up in the park opposite President Rene Preval’s palace. His weak and under-resourced government appears totally unequipped to handle the crisis, its officials in disarray and nowhere to be seen.

“So far, they have brought us nothing. We need water, food, shelter, everything, but we are on our own,” Malesta added, to cries of agreement from women sitting and lying around her.

Law and order began to break down in Haiti yesterday as “constant” gunshots were heard across the capital and shops were looted. 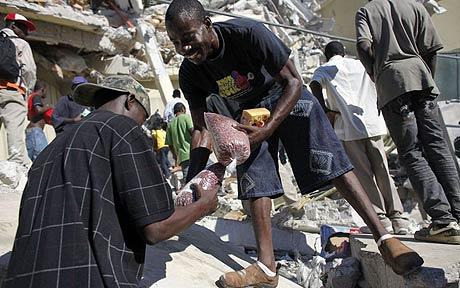 A resident loots food from the Caribbean supermarket in downtown Port-au-Prince after a major earthquake hit Haitian capital. REUTERS 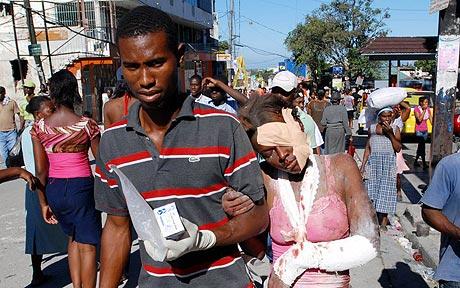 Aid groups in Port-au-Prince said the relief effort could be hampered by the deteriorating security situation as criminals and desperate locals fought for the scarce resources. AFP

More than 3,500 US troops are due to arrive in the country by the end of the week to bolster around 3,000 police and international peacekeepers who were said to have been deployed to secure the airport, port and main buildings.

But charity workers said they had seen little evidence of the security measures and warned of widespread looting and fights breaking out over dwindling water supplies.

Inmates escaped from the damaged main prison in Port au Prince on Tuesday when it collapsed in the earthquake.

Thieves were blamed for starting at least one mass panic in the city’s central square during the night, spreading rumours that a tidal wave was coming so they could steal the belongings left behind by hundreds of fleeing people.

Thieves also descended on a half-collapsed supermarket in the Delmas area of Port-au-Prince, carrying out electronics and bags of rice. Others siphoned gasoline from a wrecked tanker.

“All the policemen are busy rescuing and burying their own families,” said tile factory owner Manuel Deheusch. “They don’t have the time to patrol the streets.”

With law enforcement stretched thin even before the earthquake and the UN’s 9,000 peacekeepers distracted by the collapse of their headquarters and the loss of up to 100 staff, the country is ill-equipped to deal with major unrest.

A Boston-based medical charity said it had been trying to get the UN to secure a small area where its doctors could treat injured people only to be told that such a request was not a UN “priority”.

Valmir Fachini, a spokesman for the Brazilian charity Viva Rio charity, said he had not seen a single UN peacekeepers on security patrol.

“Unfortunately we aren’t seeing [peacekeepers] in the streets,” he said. “We are hearing several gunshots without knowing where they are coming from exactly. Looting has started in the supermarkets, which have partly fallen down,” he said.

“What is happening is that, if food doesn’t arrive, eventually the people will start looting houses. The gunshots are constant and we have the impression that its families trying to protect themselves from attackers.”

Port-au-Prince has had a serious problem with violent crime in the past although this had been improving in recent months.

Matt Marek, Haiti country representative of the American Red Cross, said: “There has been widespread looting of collapsed buildings since the earthquake hit. There is no other way to get provisions. Even if you have money, those resources are going to be exhausted in a few days.”

A local Red Cross official warned that the organisation’s ability to help people would be “weakened” if the disaster spawned a new crime wave.

The first US Army troops from the 82nd Airborne Division were expected to arrive late last night. About 100 troops will find locations to set up tents and make other preparations for the arrival of roughly 800 personnel from the division today and a full brigade of some 3,500 by the end of the weekend. They come on top of some 2,200 Marines, also due to arrive by Sunday or Monday.