Critics accuse Netanyahu of exaggerating the dangers posed by refugees 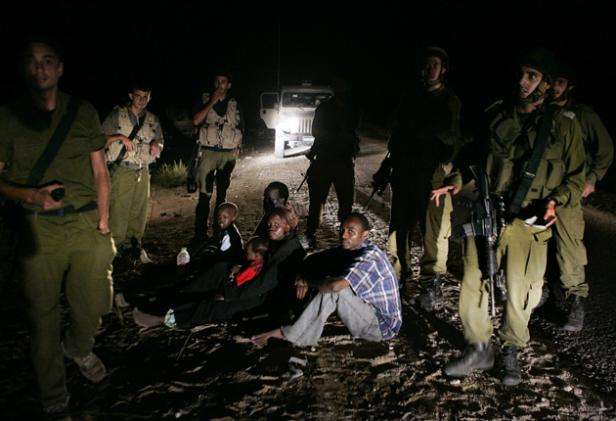 Israeli Prime Minister Benjamin Netanyahu has ordered the construction of two massive fences along his country’s southern border with Egypt in a bid to keep out African asylum seekers he claims are threatening the country’s Jewish character.

The barrier will also thwart terrorists from infiltrating the porous border, according to Mr. Netanyahu. “We are talking about a strategic decision to guarantee the Jewish and democratic character of the state of Israel,” Mr. Netanyahu said.

The prime minister insisted that the step will not stop refugees in dire need from reaching Israel, saying that the country would “remain open” to those with a genuine claim.

But critics dispute this. “This nationalist and racist rhetoric is divorced from reality,” said Dov Khenin, a left-wing member of the Knesset. He added that it was “intended to frighten the Israelis that ‘the Africans are coming’. Sudanese and Eritreans make up many of the about 20,000 asylum seekers to reach Israel via Egypt since 2005.

The project is expected to cost $270m, and will cover two parts of the border, near the city of Eilat and on the edge of the Gaza strip. Although the army began planning the fence in 2005, Mr. Netanyahu’s backing for it now is part of a wider crackdown against the influx, which refugee-rights activists say has dropped somewhat recently because of Israel’s policy of immediate returns of refugees to Egypt and shootings of refugees along the border by Egyptian troops.

The government insists the asylum seekers are economic migrants seeking a higher standard of living, but the refugees themselves often have harrowing tales of persecution in their home countries and Egypt. Egyptian police killed at least 28 Sudanese refugees during a protest in 2005, the year people began trickling to Israel. Egypt has also come under criticism for forcibly repatriating refugees to Eritrea and Sudan, where human-rights groups say they face imprisonment and even torture.

To justify its often harsh approach, the Israeli government has been repeatedly playing on the core fears of public opinion. Tzahi Hanegbi, the chairman of the Knesset’s foreign affairs and defence committee, told Israel Radio yesterday that there is no alternative to building the fence. “The infiltration of the migrants is threatening the very existence of Israel and its character,” he said. The country defines itself as both a Jewish and democratic state, something its leaders believe depends on maintaining the country’s present clear Jewish majority.

But critics of the government believe that it is contriving the threat. They note that the government itself issues visas each year to 120,000 non-Jewish migrant workers who arrive at Israel’s borders legally and that hundreds of thousands among the wave of immigrants from the former Soviet Union to reach the country during the 1990s were not Jewish.

“All of the discourse of danger to the nature of the state is empty rhetoric,” Dov Khenin said. “Every country has the right to build a fence but nothing will be solved by it, it is not a magic solution. Israel still has to respect international law. If a refugee comes to the fence, Israel as part of the international community still has an obligation to him … The sensitivities of our own history oblige us to be part of an international solution to the problem of refugees.”

The fence decision comes as the government readies to push through the Knesset draconian legislation specifying prison sentences of five to seven years for “infiltrators” and Israelis who assist them. It also follows revelations that Israeli troops have heightened their cooperation with Egyptian counterparts at the border. According to an army response submitted recently to the Israeli supreme court, at one sector of the frontier, Israeli troops fire flares to “draw attention” of Egyptian soldiers to border sites where refugees and asylum seekers are crossing.

Egyptian forces killed 39 people trying to cross into Israel during 2008 and 2009, according to Amnesty Internationa. Israel has given refugee status to an estimated 600 of those who arrived from Darfur but has issued expulsion orders against other asylum seekers. The latter live in limbo, unable to work legally but in fact doing menial jobs in hotels and as cleaners.

Israel’s migrant problem: The attraction of the Promised Land

*The influx of African refugees is a relatively new phenomenon in Israel, which contended with relatively few newcomers from Africa until 2005. When they started to arrive – prompted in part by newly draconian policies in Egypt to make the seven-hour crossing of the Sinai desert – the government tried jailing them for illegal entry.

When that failed, thanks to court challenges and critical media coverage, the government changed tack and tried helping them find jobs in the city of Eilat, where many arrived from Eritrea and Sudan, as well as Ethiopia.

Now, though, the problem has grown substantially from an initially manageable number, with around 16,500 refugees and asylum seekers thought to have arrived in 2008. They receive little government support, instead relying on help from charitable groups.

Still, many have already been refugees for many years in Egypt or Sudan, and while a new fence may signal a change in their new host nation’s approach, conditions in Israel remain more bearable than they are further west. “I’m not settled, I do not know what will happen in the future,” one refugee told Amnesty in 2008. “Still, I don’t fear from anything.”