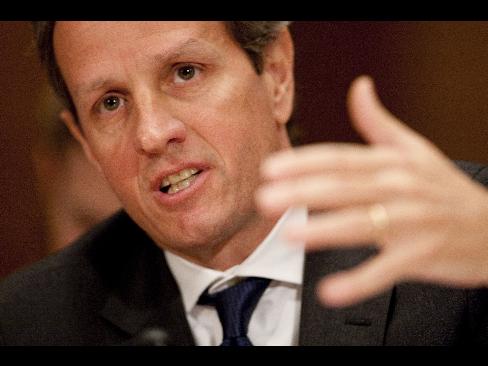 Jan. 7 (Bloomberg) — The Federal Reserve Bank of New York, then led by Timothy Geithner, told American International Group Inc. to withhold details from the public about the bailed-out insurer’s payments to banks during the depths of the financial crisis, e-mails between the company and its regulator show.

AIG said in a draft of a regulatory filing that the insurer paid banks, which included Goldman Sachs Group Inc. and Societe Generale SA, 100 cents on the dollar for credit-default swaps they bought from the firm. The New York Fed crossed out the reference, according to the e-mails, and AIG excluded the language when the filing was made public on Dec. 24, 2008. The e-mails were obtained by Representative Darrell Issa, ranking member of the House Oversight and Government Reform Committee.

The New York Fed took over negotiations between AIG and the banks in November 2008 as losses on the swaps, which were contracts tied to subprime home loans, threatened to swamp the insurer weeks after its taxpayer-funded rescue. The regulator decided that Goldman Sachs and more than a dozen banks would be fully repaid for $62.1 billion of the swaps, prompting lawmakers to call the AIG rescue a “backdoor bailout” of financial firms.

“It appears that the New York Fed deliberately pressured AIG to restrict and delay the disclosure of important information,” said Issa, a California Republican. Taxpayers “deserve full and complete disclosure under our nation’s securities laws, not the withholding of politically inconvenient information.”

“Secretary Geithner played no role in these decisions,” Meg Reilly, a Treasury spokeswoman, said in an e-mail. “He was recused from working on issues involving specific companies, including AIG,” after his nomination for Treasury secretary on Nov. 24, 2008. Geithner “began to insulate himself weeks earlier in anticipation of his nomination,” she said in a separate statement.

Geithner, who was tapped by President Barack Obama, took the Treasury job in January, 2009. Mark Herr, a spokesman for New York-based AIG, declined to comment.

Issa requested the e-mails from AIG Chief Executive Officer Robert Benmosche in October after Bloomberg News reported that the New York Fed ordered the crippled insurer not to negotiate for discounts in settling the swaps. The decision to pay the banks in full may have cost AIG, and thus taxpayers, at least $13 billion, based on the discount the insurer was seeking.

The e-mail exchanges between AIG and the New York Fed over the insurer’s disclosure of the transactions show that the regulator pressed the company to keep details out of the public eye. Issa’s comments add to criticism from Republican lawmakers, including Senator Chuck Grassley of Iowa and Representative Roy Blunt of Missouri, who wrote letters in the past two months demanding information from Geithner, 48, about the costs of the AIG bailout.

Barney Frank, a Massachusetts Democrat and chairman of the House Financial Services Committee, said the e-mail exchanges were “troubling” and that he supports holding congressional hearings to review them.

AIG’s Dec. 24, 2008, filing was challenged privately by the U.S. Securities and Exchange Commission, which polices the adequacy of disclosures by publicly traded firms. The agency said in a letter to then-CEO Edward Liddy six days later that AIG should provide a Schedule A, which lists collateral postings for the swaps and names the bank counterparties that purchased them from the company. The Schedule A was disclosed about five months later in a filing.

“Our position has always been that if AIG’s securities lawyers determine that AIG is legally obligated to make a particular filing or disclosure, then that is what AIG must do,” Thomas Baxter, general counsel for the New York Fed, said in a statement. He said it was appropriate for the New York Fed, as party to deals outlined in the filings, “to provide comments on a number of issues, including disclosures, with the understanding that the final decision rested with AIG’s securities counsel.”

Kathleen Shannon, an AIG deputy general counsel, wrote to the insurer’s executives in a March 12, 2009, e-mail about the conflicting demands from the New York Fed and SEC.

“In order to make only the disclosure that the Fed wants us to make,” Shannon wrote, “we need to have a reasonable basis for believing and arguing to the SEC that the information we are seeking to protect is not already publicly available.”

Under pressure from lawmakers, AIG disclosed the names of the counterparties, which included Deutsche Bank AG and Merrill Lynch & Co., on March 15. The disclosure said AIG made more than $27 billion in payments without identifying the securities tied to the swaps or listing the value of individual purchases by each bank, details the Fed wanted to keep out, according to the March 12 e-mail from AIG’s Shannon.

Earlier that month, Fed Vice Chairman Donald Kohn testified to Congress that disclosure of the counterparties would harm AIG’s ability to do business. The insurer agreed to turn over a stake of almost 80 percent in connection to its bailout.

The e-mails span five months starting in November 2008 and include requests from the New York Fed to withhold documents and delay disclosures. The correspondence includes e-mails between AIG’s Shannon and attorneys at the New York Fed and its law firm, Davis Polk & Wardwell LLP. Tom Orewyler, a spokesman for Davis Polk in New York, declined to comment as did Shannon.

According to Shannon’s e-mails obtained by Issa, the New York Fed suggested that AIG refrain in a filing from mentioning so-called synthetic collateralized debt obligations, which bundled derivative contracts rather than actual loans.

‘No Mention of the Synthetics’

The filing “reflects your client’s desire that there be no mention of the synthetics in connection with this transaction,” Shannon wrote to Davis Polk on Dec. 2, 2008. “They will not be mentioned at all.”

AIG had about $9.8 billion of swaps protecting the synthetic holdings as of September 2008, the company said on Dec. 10, 2008. Goldman Sachs said in a press release last month that it was among banks that had losses on synthetic CDOs.

As part of a bailout that swelled to $182.3 billion, AIG and the Fed created Maiden Lane III, a taxpayer-funded facility designed to remove mortgage-linked swaps from the insurer’s books. Shannon told the New York Fed on Nov. 24, 2008, that AIG executives wanted to publicly disclose details about Maiden Lane the next day.

“Do you think it might be feasible to hold off on the Maiden Lane III 8K and press release until next week?” Brett Phillips, a New York Fed lawyer wrote in an e-mail that day. “The thinking is that the Maiden Lane III closing will be a less transparent event, and it might be better to narrow the gap between AIG’s announcement and the New York Fed’s publication of term sheet summaries.”

‘Guided By Your Counsel’

“Given the significance of the transaction, AIG would be best served by filing tomorrow,” Shannon wrote. “We will of course be guided by your counsel.” The document outlining the Maiden Lane agreement was posted on Dec. 2, 2008.

In at least one instance, AIG pushed for documents to be disclosed and then released the information.

“We believe that the agreements listed in the index (i.e., the Master Investment and Credit Agreement and the Shortfall Agreement) do not need to be filed,” Peter Bazos, a Davis Polk lawyer wrote on Nov. 25, 2008. “Please let us know your thoughts in this regard.”

AIG’s Shannon replied that “the better practice and better disclosure in this complex area is to file the agreements currently rather than to delay.” The agreements were included in the Dec. 2 filing.

More details of the negotiations over swaps payments emerged in November 2009 when Neil Barofsky, the special inspector in charge of policing the Troubled Asset Relief Program, assessed the Fed’s role in the bailout.

“Federal Reserve officials provided AIG’s counterparties with tens of billions of dollars they likely would have not otherwise received,” Barofsky wrote in a Nov. 17 report. “The default position, whenever government funds are deployed in a crisis to support markets or institutions, should be that the public is entitled to know what is being done with government funds.”

The New York Fed may eventually recoup its loan to Maiden Lane III, the vehicle that obtained CDOs from the banks after paying to cancel the swaps, Barofsky wrote. According to a New York Fed report, the value of securities and cash held in Maiden Lane III climbed 4.5 percent to $23.5 billion in the three months ended Sept. 30.

AIG’s first rescue was an $85 billion credit line from the New York Fed in September 2008. The bailout was expanded three times and is valued at $182.3 billion. That includes a $60 billion Fed credit line, an investment of as much as $69.8 billion from the Treasury and up to $52.5 billion for Maiden Lane facilities to buy mortgage-linked assets owned or backed by the company.