Gross warns on risks of US deficit 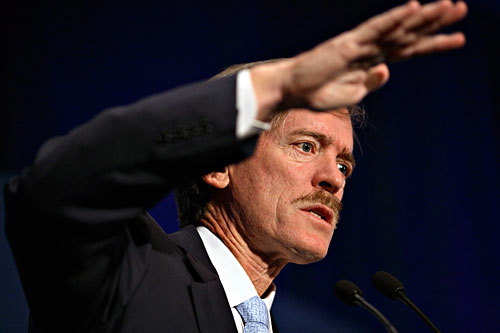 Jan. 7 (Financial Times) – Bill Gross, the influential bond fund manager who is one of the world’s biggest investors in sovereign debt, said it was unlikely that the US economy was strong enough for the government to “gracefully exit” stimulus spending programmes or that private investors would be capable of absorbing the balance in deficit funding.

In a monthly investment outlook Mr Gross, managing director and a founder of Pimco, which has $940bn under management, commented on US healthcare legislation, the resulting budget deficits and the potential impact on financial markets.

The four-page commentary, entitled “Let’s Get Fisical”, included a scathing attack on the workings of the US political system. He urged the American people to use social networking sites like Twitter to have their voices heard over individual political donors.

“Our government doesn’t work anymore, or perhaps more accurately, when it does, it works for special interests and not the American people,” said Mr Gross. “When special interests, even singular citizens, write a cheque, it represents a perversion of democracy, not the exercise of the First Amendment.”

In highlighting that just $500m spent in healthcare lobbying by labour, insurance, “big pharma” and related corporate interests would generate a $50bn-$100bn annual return, he said, “What amazes me most of all is that politicians can be bought so cheaply.”

Mr Gross said that while he was “distressed” at the state of US democracy, a rational money manager could not afford to “get mad” when it comes to investing clients’ money. Global investment managers have a choice of sovereign credits where “stable inflation and fiscal conservation are available”, he said.

The fund warned that the days of “carefree cheque-writing leading to debt issuance without limit or interest consequences may be numbered for all countries”.

“Investors, like national citizens, need to be vigilant, and there has been a decided lack of vigilance in recent years from both camps in the US,” he continued. “While my own Pollyanna-ish advocacy of ‘cheque-free’ elections may be quixotic, the shifting of private investment dollars to more fiscally responsible government bond markets may be a very real outcome in 2010 and beyond.”

He said that while the US fiscal deficit required $1,500bn in new debt to finance it in 2009, not much of it was sold to private investors, and that it was unlikely that the US economy was strong enough for the government to “gracefully exit” or that private investors would be capable of absorbing the balance.

Mr Gross pointed to studies suggesting that those countries with the highest current and projected deficits as a percentage of gross domestic product (which currently include the UK and US) will suffer the highest interest rate increases, possibly as much as 25 basis points for every 1 per cent increase in projected deficits five years forward.

He believes interest rates will rise on a relative basis in the US, UK and Japan compared with Germany over the next several years, and that the increase could be around 100 basis points or more.

The differential between German government bonds and those of the US or UK is already about 50 basis points.

He added that if exit strategies proceeded as planned, all US and UK asset markets might suffer from the absence of nearly $2,000bn of government cheques written in 2009, and he warned that most “carry trades” in credit, duration and currency space might be at risk in the first half of 2010 as the markets readjusted to the absence of their “sugar daddy”.

Mr Gross’s outlook further highlighted Pimco’s announcement earlier this week that it was cutting its exposure to UK and US government debt.