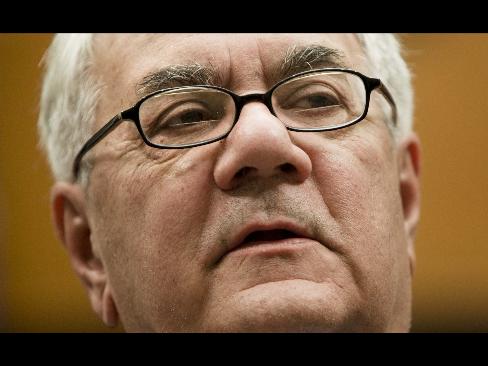 Representative Barney Frank, a Democrat from Massachusetts, speaks during a news conference on Capitol Hill in Washington (Getty Images)

Dec. 30 (Bloomberg) — To close out 2009, I decided to do something I bet no member of Congress has done — actually read from cover to cover one of the pieces of sweeping legislation bouncing around Capitol Hill.

Hunkering down by the fire, I snuggled up with H.R. 4173, the financial-reform legislation passed earlier this month by the House of Representatives. The Senate has yet to pass its own reform plan. The baby of Financial Services Committee Chairman Barney Frank, the House bill is meant to address everything from too-big-to-fail banks to asleep-at-the-switch credit-ratings companies to the protection of consumers from greedy lenders.

I quickly discovered why members of Congress rarely read legislation like this. At 1,279 pages, the “Wall Street Reform and Consumer Protection Act” is a real slog. And yes, I plowed through all those pages. (Memo to Chairman Frank: “ystem” at line 14, page 258 is missing the first “s”.)

The reading was especially painful since this reform sausage is stuffed with more gristle than meat. At least, that is, if you are a taxpayer hoping the bailout train is coming to a halt.

If you’re a banker, the bill is tastier. While banks opposed the legislation, they should cheer for its passage by the full Congress in the New Year: There are huge giveaways insuring the government will again rescue banks and Wall Street if the need arises.

Here are some of the nuggets I gleaned from days spent reading Frank’s handiwork:

— For all its heft, the bill doesn’t once mention the words “too-big-to-fail,” the main issue confronting the financial system. Admitting you have a problem, as any 12- stepper knows, is the crucial first step toward recovery.

— Instead, it supports the biggest banks. It authorizes Federal Reserve banks to provide as much as $4 trillion in emergency funding the next time Wall Street crashes. So much for “no-more-bailouts” talk. That is more than twice what the Fed pumped into markets this time around. The size of the fund makes the bribes in the Senate’s health-care bill look minuscule.

— Oh, hold on, the Federal Reserve and Treasury Secretary can’t authorize these funds unless “there is at least a 99 percent likelihood that all funds and interest will be paid back.” Too bad the same models used to foresee the housing meltdown probably will be used to predict this likelihood as well.

— The bill also allows the government, in a crisis, to back financial firms’ debts. Bondholders can sleep easy — there are more bailouts to come.

— The legislation does create a council of regulators to spot risks to the financial system and big financial firms. Unfortunately this group is made up of folks who missed the problems that led to the current crisis.

— Don’t worry, this time regulators will have better tools. Six months after being created, the council will report to Congress on “whether setting up an electronic database” would be a help. Maybe they’ll even get to use that Internet thingy.

— This group, among its many powers, can restrict the ability of a financial firm to trade for its own account. Perhaps this section should be entitled, “Yes, Goldman Sachs Group Inc., we’re looking at you.”

— The bill also allows regulators to “prohibit any incentive-based payment arrangement.” In other words, banker bonuses are still in play. Maybe Bank of America Corp. and Citigroup Inc. shouldn’t have rushed to pay back Troubled Asset Relief Program funds.

— The bill kills the Office of Thrift Supervision, a toothless watchdog. Well, kill may be too strong a word. That agency and its employees will be folded into the Office of the Comptroller of the Currency. Further proof that government never really disappears.

— Since Congress isn’t cutting jobs, why not add a few more. The bill calls for more than a dozen agencies to create a position called “Director of Minority and Women Inclusion.” People in these new posts will be presidential appointees. I thought too-big-to-fail banks were the pressing issue. Turns out it’s diversity, and patronage.

— Not that the House is entirely sure of what the issues are, at least judging by the two dozen or so studies the bill authorizes. About a quarter of them relate to credit-rating companies, an area in which the legislation falls short of meaningful change. Sadly, these studies don’t tackle tough questions like whether we should just do away with ratings altogether. Here’s a tip: Do the studies, then write the legislation.

— The bill isn’t all bad, though. It creates a new Consumer Financial Protection Agency, the brainchild of Elizabeth Warren, currently head of a panel overseeing TARP. And the first director gets the cool job of designing a seal for the new agency. My suggestion: Warren riding a fiery chariot while hurling lightning bolts at Federal Reserve Chairman Ben Bernanke.

— Best of all, the bill contains a provision that, in the event of another government request for emergency aid to prop up the financial system, debate in Congress be limited to just 10 hours. Anything that can get Congress to shut up can’t be all bad.

Even better would be if legislators actually tackle the real issues stemming from the financial crisis, end bailouts and, for the sake of my eyes, write far, far shorter bills.

(David Reilly is a Bloomberg News columnist. The opinions expressed are his own.)

To contact the writer of this column: David Reilly at dreilly14@bloomberg.net