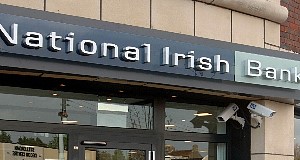 IT MIGHT sound like a contradiction in terms, but for the first time one of the main Irish consumer banks is moving to cashless banking in all its branches.

National Irish Bank has written to thousands of its customers this month informing them of a “new style of banking” in which branches will not handle over-the-counter cash transactions.

Customers are advised to obtain cash from “ATMs nationwide” or to seek “cash-back” on their debit cards.

A spokesman confirmed that cashless banking was being introduced across the entire NIB branch network over the next 18 months, and had already been introduced successfully in a number of branches. He said the feedback from customers was positive with few complaints.

“These branches provide better security for staff and allow us to spend more time, in a better setting, with our customers . . . Customers like them, as our staff have more time to discuss customers’ overall needs.”

However, NIB customer Frank Barry from Malahide described the change as hilarious and ridiculous: “A bank refusing to accept cash . . . I thought that’s what they are for?”

Mr Barry contacted The Irish Times after his wife Catherine Gralton received two letters informing her that the local branch would stop handling cash from next February.

“If I did have a cash lodgement, I would have to go to another bank, buy a bank draft and then go to NIB to lodge it,” he said.

An NIB spokesman said the changes followed the model used by NIB’s parent, Danish-owned Danske Bank. Cashless banking is far more common in Scandinavia. while Irish dependence on cash is among the highest in Europe.

The spokesman said it recognised that some business customers may need to lodge and withdraw cash and it would offer these a number of options.

However, he declined to say what these options were, citing security reasons.

NIB announced earlier this month it was cutting 150 jobs and closing 25 of the bank’s 58 branches because of the recession and changes in the banking sector.

ACC Bank, which specialises in business lending, has also moved to cashless operations.

The Irish Banking Federation said it was not aware of any other main banks introducing cashless banking at this stage, though a spokesman added that “they would all love to”.

Handling cash is more expensive than the non-cash alternatives such as internet banking or debit and credit cards.

Cash also poses greater security threats for the banks, whereas consumers bear many of the risks associated with non-cash transactions.

NIB in particular has suffered a number of high-profile robberies and one of the branches it has already converted to cashless banking, on Dublin’s Howth Road, was the scene of a so-called tiger robbery in 2006.