President alleges drone came from Colombia, flew over military base 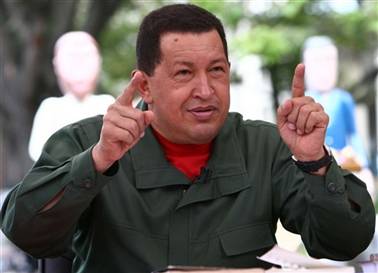 Venezuela’s President Hugo Chavez on Sunday during his weekly radio and television show.

CARACAS, Venezuela – President Hugo Chavez on Sunday accused the U.S. of violating Venezuela’s airspace with an unmanned spy plane, and ordered his military to be on alert and shoot down any such aircraft in the future.

Speaking during his weekly television and radio program, Chavez said the aircraft overflew a Venezuelan military base in the western state of Zulia after taking off from neighboring Colombia. He did not elaborate, but suggested the plane was being used for espionage.

“These are the Yankees. They are entering Venezuela,” he said.

“I’ve ordered them to be shot down,” Chavez said of the aircraft. “We cannot permit this.”

Chavez has accused Colombia of allowing the United States to use its military bases to prepare a possible attack against Venezuela.

Both the U.S. and Colombia have denied such allegations in the past, saying the U.S. military presence is for the sole purpose of combating drug trafficking.

A spokeswoman for the U.S. Embassy said the mission had no information about any flyover and had not been contacted by Chavez’s administration.

“If the Venezuelan government would like to speak with us about any issue, we would welcome discussions because we seek open dialogue with all nations in the hemisphere,” spokeswoman Robin Holzhauer said.

It is not uncommon for Chavez to accuse other nations, especially the U.S. and its allies, of conspiring against Venezuela.

Last week, the president accused the Netherlands of letting the U.S. military use Dutch islands off Venezuela’s Caribbean coast to prepare for a possible military offensive. The former paratroop commander said the U.S. military has sent intelligence agents, warships and spy planes to Aruba, Curacao and Bonaire, which are self-governing Dutch islands.

Rijs said U.S. soldiers do use civilian air fields on Curacao and Aruba, but only for anti-drug trafficking efforts.