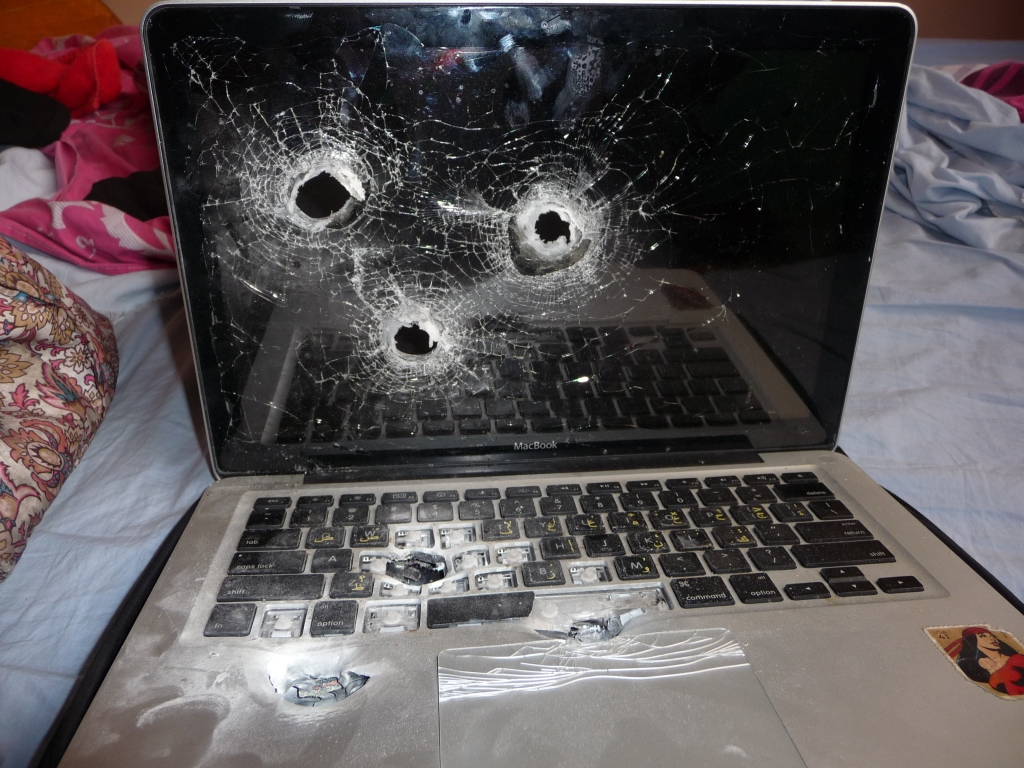 An American student entering Israel from Egypt via the border crossing at Taba two weeks ago stood stunned as Israeli Border Police officers determined her laptop computer was a security threat and shot it three times.

Lily Sussman, 21, wrote on her blog that the police officers subjected her to two hours of questioning and searches, before firing three bullets into her Apple Macbook.

“They had pressed every sock and scarf with a security device, ripped open soap and had me strip extra layers. They asked me tons of questions,” Sussman wrote, describing the experience.

“Who do you know? Do you have a boyfriend? Is he Arab, Egyptian, Palestinian? Why do you live in Egypt? Why not Israel? What do you know about the ‘conflict’ here? What do you think? They quizzed me on Judaism, which I know nothing about,” she continued.

Sussman blogged that she then heard an announcement on the loudspeaker that “was something along the lines of, ‘Do not to be alarmed by gunshots because the Israeli security needs to blow up suspicious passenger luggage.'”

Moments later, Sussman wrote, a man came to her and introduced himself as the duty manager, who told her: “I’m sorry but we had to blow up your laptop.”

“The security officers did not ask about my laptop prior to shooting it,” Sussman told Daily News Egypt. “They used the term ‘blew up’ when they told me they destroyed my laptop. I don’t know why they shot it.”

Sussman said the guards also looked through the photos on her camera, flipped through her journal and asked her about a map a friend had drawn for her that depicted a main street, central bus station and the hostel where she was planning on staying in Jerusalem.

She said that she had also been carrying an Arabic phrasebook, stamps from Syria, Qatar and the UAE and a Palestinians in Palestine guidebook.

The Israel Airports Authority said in response that, “A [security] check performed on the lady’s luggage signalled the need for security personnel to follow procedure. The police who carried out the operation in question were called to the scene. We suggest you approach the Israel Police for any additional information.”

Sussman managed to salvage the hard drive and security officials at the crossing gave her an address where she would be reimbursed for her mangled laptop, she told Daily News Egypt.

“I’m going through the process of compensation,” she said. “It supposedly will take about one month to receive the money.”