Insurgents in three countries used a favored weapon – car bombs – to strike at the heart of population centers Tuesday, killing at least 50 people and, in two cases, raising security concerns near U.S. installations. 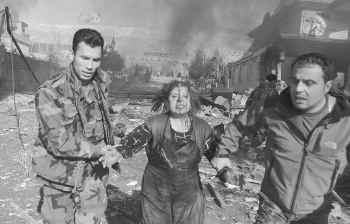 Two men guide a woman toward safety after she was wounded in a suicide bombing in Kabul, Afghanistan. The explosion occurred outside the Heetal Hotel, frequented by foreigners. Several bombings in the region Tuesday targeted population centers.

AFGHANISTAN: A suicide car bomber killed eight Afghans in an attack targeting the Wazir Akbar Khan neighborhood, where many former and current Afghan officials live. Forty people were wounded in the attack, which took place just blocks from the U.S. Embassy.

Former Vice President Ahmad Zia Massoud lives near the site of the blast but wasn’t there at the time. Massoud is the brother of Ahmad Shah Massoud, former leader of the Taliban-fighting Northern Alliance, who was killed by an al-Qaeda suicide bomber on Sept. 9, 2001, a precursor attack to the Sept. 11, 2001, terrorist strikes in the United States.

PAKISTAN: A suicide attacker detonated a car bomb in a market close to a politician’s home in the central Pakistan town of Dera Ghazi Khan, killing 33 people and wounding 60. The attack badly damaged the home of the politician and nearby shops and buildings, including a mosque and a bank.

It was unclear whether the bomber was targeting the home of the politician, Zulfiqar Khosa, who was not there at the time, or the market. Most of the dead and injured were people at the market.

Under Western pressure, the Pakistani army launched an offensive against the Taliban stronghold of South Waziristan in October. The militants have retaliated with an onslaught of bombings that have killed more than 500 people.

IRAQ: In Baghdad, three parked cars packed with explosives blew up within minutes of one another outside different entrances to the heavily fortified Green Zone, which houses parliament, ministries and the U.S. Embassy. Five people were killed and 16 wounded.

In the northwestern city of Mosul, two car bombs and a roadside mine killed four people and injured about 40. The attacks appeared to target a busy neighborhood and a church, said a doctor at Mosul general hospital.

The attacks, along with a series of strikes in central Baghad last week that killed 127 people and wounded 500, intensified pressure on Prime Minister Nouri al-Maliki to improve security as he heads into key elections early next year.