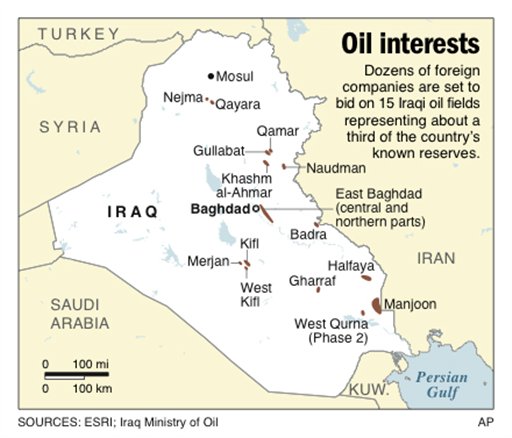 BAGHDAD — A consortium led by Russia’s private oil giant won the biggest prize of Iraq’s second oil auction this year, nabbing a field initially promised them a decade ago by Saddam Hussein while other companies Saturday showed little interest in offerings outside the secure southern part of the country.

The field was the crown jewel of Iraq’s second international oil auction, which has placed some of the country’s most coveted sites up for grabs compared with the riskier fields that drew little interest in the first auction in June. In all, 15 fields were offered over two days, and of the seven offered Saturday, four were awarded.

“It is a big victory for Iraq,” Oil Minister Hussain al-Shahristani told reporters after the final field was auctioned. “It is a big achievement for Iraq to win such contracts at the current prices.”

The aggressive interest in West Qurna 2 — the biggest of the 15 offered — reflected not only its ample reserve base and cheap development costs, but also its location in the relatively Shiite heartland in Iraq’s south.

In the opening round of the two-day auction Friday, an alliance grouping European giant Shell and Petronas was awarded the 12.5 billion barrel Majnoon field, also in the south.

But the bidding quickly tapered off as representatives from the 44 international companies participating in the auction showed little interest for fields located in the more restive eastern parts of Iraq, near Baghdad or near Mosul in the north.

The Lukoil-Statoil alliance will get $1.15 per barrel they produce and will work to raise output from West Qurna 2 to 1.8 million barrels per day over 13 years.

Overall, the second and final day of the event drew more interest than the first in which only two fields went on the spot.

On Friday, companies steered clear from fields in the restive eastern region, as well as near Baghdad and in the north — opting instead for offerings that were both safe and cheap to develop.

Iraq was forced to withdraw five fields Friday and announce it would develop them by itself.

Even so, officials hailed that day as a success, as much perhaps for the actual outcome as the need to make up for the dismal showing in the June international auction — the country’s first in over three decades.

At that event, only one deal field was struck on the spot, with Britain’s BP and China National Petroleum Corp. nabbing the 17.8 billion barrel Rumaila field in the south. Deals on two other southern fields were brokered later.

Analysts said that event failed as much because of Iraq’s restrictive terms as for security concerns.

In this bidding round, Iraq appeared to be more flexible, giving the companies more operational control over the fields while still focusing on heavily on the price it was willing to pay them for each barrel produced.

Companies must accept 20-year service contracts and receive a flat fee per barrel produced for their services instead of production-sharing contracts, which are much more lucrative.

Iraq, which holds the world’s third-largest proven reserves of crude, is desperate for foreign oil investment to boost production and bring in new technology to revamp an oil sector battered by decades of war and sanctions.

It was counting on this auction to help them do just that.

But with no bids submitted on over half the fields offered, it was clear that the promise of Iraq’s mother lode of oil was not enough to overcome concerns about operating in a country where bombings — while less frequent that just two years ago — are still a fact of life.

In other deals Saturday, the roughly 863 million barrel Gharraf field in the south went to Petronas and Japex, which outbid three other consortiums led by Turkey’s TPAO, Kazakhstan’s Kaz Munai and Petramania. The Petronas-Japex alliance will get $1.49 per barrel of oil they produce and are targeting boosting output to 230,000 barrels per day over 13 years.

Meanwhile, a consortium grouping Russia’s Gazprom, TPAO, Korea’s KOGAS and Petronas walked away with the Badra field in central Iraq, but only after they revised down their bid to match the $5.50 per barrel Iraq was willing to pay the companies for their efforts in the field.

The consortium had initially requested $6 per barrel and promised to raise output in the field to 170,000 barrels per day within seven years.

Three other fields on offer in central Iraq — Kifl, West Kifl and Merjan in Karbala and Najaf provinces — attracted no bids and al-Shahristani said the country would develop them by itself.

Nejma, the final field on offer, attracted interest only from Angola’s Sonangol. The firm had to revise down its request for $8.5 per barrel produced in the northern field to the $6 per barrel Iraq was willing to pay.

Sonangol also agreed Saturday to Iraq’s lower financial terms for the Qayara field near Mosul, also in the north.

On Friday, it has offered a bid that was initially rejected as too high.