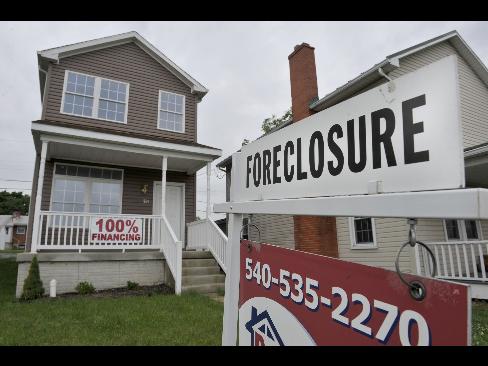 A foreclosure sign stands outside a home in Winchester, Virginia (Bloomberg)

Dec. 10 (Bloomberg) — Foreclosure filings in the U.S. will reach a record for the second consecutive year with 3.9 million notices sent to homeowners in default, RealtyTrac Inc. said.

“We are a long way from a recovery,” John Quigley, economics professor at the University of California, Berkeley, said in an interview. “You can’t start to see improvement in the housing market until after unemployment peaks.”

Foreclosure filings exceeded 300,000 for the ninth straight month in November, RealtyTrac said today. A weak labor market and tight credit are “formidable headwinds” for the economy, Federal Reserve Chairman Ben S. Bernanke said in a Dec. 7 speech in Washington. The 7.2 million jobs lost since the recession began in December 2007 are the most of any postwar economic slump, Labor Department data show. Unemployment, at 10 percent last month, won’t peak until the first quarter, Quigley said.

Loan-modification programs and an expanded government tax credit for first-time homebuyers are helping slow the monthly pace of filings and “keeping a lid” on further foreclosures, James Saccacio, RealtyTrac’s chief executive officer, said in the statement.

November filings fell 15 percent from the July peak and dropped 8 percent from October, the seller of default data said. That was the fourth straight monthly drop.

A total of 306,627 properties received a default or auction notice or were seized by banks last month, or one in 417 U.S. households, and a similar number are expected for December, RealtyTrac said.

There have been 3.6 million filings from January through November, the most in RealtyTrac records dating to January 2005.

Three loans went bad for every one that improved in the first 10 months of this year, according to a Dec. 2 report from Lender Processing Services Inc.

The combined delinquency and foreclosure rate for all loans increased to 12.6 percent through October, the Jacksonville, Florida-based loan servicing and mortgage data company said.

Still, fewer than 1.5 million homeowners — or less than half of those targeted — were eligible as of last month for President Barack Obama’s Home Affordable Modification Program, Herb Allison, Treasury assistant secretary for financial stability, said in Dec. 8 congressional testimony.

“Federal programs have not been successful and have done little about declining asset values,” Quigley said. “The probability that a renegotiated mortgage goes into subsequent default is substantially high.”

Nevada had the highest foreclosure rate for the 35th consecutive month, with one in 119 households receiving a filing in November. Total filings dropped 33 percent from both a year earlier and the previous month, to 9,295.

Florida ranked second, with filings for one in every 165 households. California was third, at one in 180, RealtyTrac said.

California had the most filings with 73,995, up 22 percent from a year earlier. Foreclosure notices in the most populous state have fallen on a monthly basis since peaking in July, according to RealtyTrac.

Illinois was third with 16,422 filings, more than double a year earlier. They fell 18 percent from a record high in October.

Michigan ranked fourth with 15,988, up 10 percent from a year earlier. Arizona, Texas, Ohio, Georgia, Nevada and New Jersey completed the 10 states with the most filings, RealtyTrac said.

Three California cities had the highest foreclosure rates among metropolitan areas with populations of 200,000 or more. Merced led, with one in every 83 households there getting a notice, five times the national average. Stockton was second at one in 85, and Modesto was third at one in 87.

Cape Coral-Fort Myers, Florida, was fourth with one in 96 households receiving a notice, and Las Vegas was fifth at one in 102, according to RealtyTrac.

To contact the reporter on this story: Dan Levy in San Francisco at dlevy13@bloomberg.net.