Aren’t you glad your government bailed out the banksters?

Now the taxpayer will have to pay the bill and this is just the beginning.

Welcome to Gordon Brown’s ‘New World Order’, where you will not have to worry about the middle class anymore, because there will be only the elite and slaves.

The middle classes and the better-off are to be hit with £7 billion a year in new taxes, Alistair Darling has disclosed in his pre-Budget report. 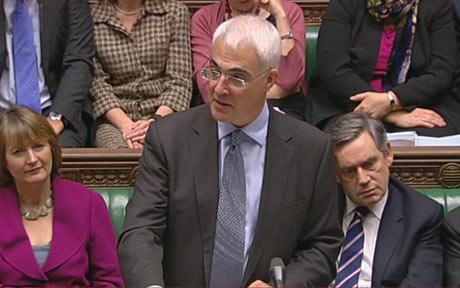 The Chancellor announced increases in national insurance contributions for workers, while freezing a key income tax threshold to push more income into the 40 per cent tax band.

The Treasury will also take more money in inheritance tax and levy a new tax on financial workers’ bonuses. Pension relief will be cut for some high earners and taxes will rise on company cars and workplace canteens.

More than 10 million people will pay more national insurance from 2011 after changes announced in the pre-Budget report; someone earning £50,000 a year will pay an extra £253 a year.

Hundreds of thousands will be pushed into the higher rate of income tax for the first time from 2012. Existing higher rate taxpayers will see more of their income taxed at 40 per cent.

In his pre-Budget report, Mr Darling announced £3 billion of new taxes on middle-class Britain in 2011, which will come on top of around £4 billion announced earlier this year.

The package of taxes draw a barrage of criticism. Business leaders called the NI rise “a tax on jobs” and “an act of madness”. The Tories accused Labour of a “class war” on aspiration.

Mr Darling said the tax rises are needed to help control the Government’s record deficit, but the Tories said most of the £8.5 billion he will raise in two years from 2011 will actually go to fund more spending on Labour’s chosen public services.

The Chancellor attempted to calm City fears by announcing that he would halve the Government’s deficit in four years time by increasing taxes and squeezing some Whitehall departments’ budgets.

But he insisted that spending on schools, hospitals and the police will still rise, rejecting Conservative calls to cut deeper and quicker into the public sector.

According to the independent Institute for Fiscal Studies, Mr Darling has actually increased the Government’s planned spending by £15 billion over two years from 2011.

Admitting that the UK economy will shrink by 4.5 per cent this year, a peacetime record, Mr Darling said that borrowing will be higher than he had forecast, reaching £178 billion this year.

Despite Mr Darling’s promises to curb the annual Government over-spend, the nation’s accumulated debt will go on rising, hitting £1.5 trillion in five years.

Mr Darling said that the City bankers and public sector workers will also have to pay for Labour’s plans.

Banks paying bonuses will now have to pay a one-off 50 per cent levy. However, the tax will raise only a modest sum and sparked predictions that it will be widely avoided.

Millions of public sector workers will effectively take a pay cut from 2011 after Mr Darling said annual rises will be capped at 1 per cent, below the expected rate of inflation.

But risking controversy, it emerged that MPs will not be covered by the cap, and remain in line for a big pay rise under new expenses rules.

The unexpected rise in NI, which will hit all those earning more than £20,000, was the most striking announcement in Mr Darling’s speech.

He said there would be another 0.5 per cent increase in National Insurance contributions – effectively a rise in income tax. It will come into force in 2011 alongside a previous 0.5 per cent rise.

Defending the tax rises Mr Darling said: “The biggest burden will fall on those with the broadest shoulders.”

Privately, senior Treasury sources said the NI rise was the least painful way to raise money for Labour’s plans. Mr Darling is understood to have considered and rejected increasing VAT to 18 or 19 per cent.

Mr Darling told MPs Labour’s plans would restore growth to the economy. The UK economy is “on the road to recovery,” he said, predicting robust growth by 2011.

George Osborne, the shadow chancellor, said Mr Darling’s statement was a “catastrophe” for the country. He warned that every family in Britain was now paying for Labour’s “criminal” economic irresponsibility.

The tax plan buried New Labour forever, he said. “The message to aspiring families is pretty clear. If you want to get on in life, then the Labour Party is not for you any more. Every family in the country is going to be forced to pay for years for this Prime Minister’s mistakes.”

Vince Cable, the Liberal Democrat treasury spokesman, said: “What we needed was a national economic plan and what we have got is an election manifesto.”

In the Commons, there were jeers from the the opposition benches as Mr Darling claimed he was setting out his plans “from a position of strength”.

The rise in national insurance was a surprise, and Labour ministers were forced to defend the move.

Yvette Cooper, the Work and Pensions Secretary, said it was “proportionate” that those earning £20,000 would pay more tax.

Richard Lambert, the CBI Director-General, said: “The Chancellor has made a serious mistake imposing an extra jobs tax at a time when the economic recovery will still be fragile. Increasing the National Insurance contribution will hold back job creation and growth.”

Stephen Robertson, director general of the British Retail Consortium, said: “This is madness. This makes it more expensive for all businesses to maintain and create jobs.”

The inmates have taken over the asylum:

– Police arresting innocents in order to get their DNA for Big Brother database: Senior Government advisers

– UK government to introduce the most radical copyright proposal ever, declares war on principles of free speech, privacy, freedom of assembly, the presumption of innocence, and competition

– North Sea oil collapse is dragging UK economy down with it

– The government spent £4,350 per family to bailout Britain’s banksters

– Council bans British parents from public playgrounds, because they have not undergone criminal record checks

– UK: Cash-strapped sell their kidneys to pay off debts