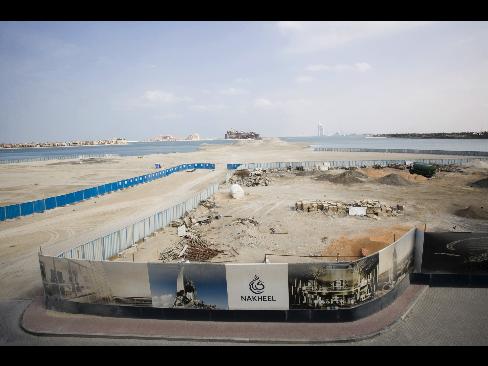 Dec. 7 (Bloomberg) — Nakheel PJSC creditors may win the right to seize a strip of barren waterfront land the size of Manhattan if the company defaults on the $3.5 billion bond backing the development.

Investors will be able to seek foreclosure on the property’s mortgages should the Dubai World unit fail to repay the loan, according to the bond’s prospectus. The debt is due on Dec. 14, after which Nakheel has two weeks to remedy a default.

The property forms part of the Dubai Waterfront project, where Nakheel plans to build a city twice the size of Hong Kong Island. The site is empty except for a cluster of partly finished low-rise buildings, idle cranes and a few roaming camels. Dubai World is delaying the projects it hasn’t started because of the credit crisis, according to Abdulrahman Al Saleh, director general of Dubai’s Department of Finance.

“The project isn’t likely to happen,” said Saud Masud, a Dubai-based real estate analyst at UBS AG. “I’d be very surprised if anything is built in the next five years.”

Dubai World is trying to restructure $26 billion of debt after seeking a “standstill” agreement on liabilities including Nakheel’s sukuk bond on the waterfront parcel. The bond is secured against a 50-year lease on 677 million square feet (63 million square meters) of land that forms the southern part of the waterfront project, as well as a series of man-made islands in the shape of a crescent.

The land backing the bond was valued at $4.2 billion by Jones Lang LaSalle Inc. three years ago, based on the entire project being ready by 2018, when it would be worth $11.8 billion, the prospectus said. Thierry Loue, Jones Lang LaSalle’s chief executive officer for the Middle East and North Africa, declined to comment on the land’s current value when contacted by Bloomberg today.

Sukuk are securities that comply with Islamic law, which forbids interest-bearing bonds. The leases on the two Nakheel properties were sold to a special-purpose vehicle that issued the sukuk. They were then leased back to Nakheel, which made rental payments to stay within the law.

The sukuk’s trustee, acting on behalf of noteholders, can “take any action to enforce any of the security documents,” if Nakheel doesn’t redeem the bond, said the 2006 prospectus, which classifies the mortgages as security documents.

“The outcome of Nakheel will set the tone of how people will approach the question of access to assets, what a security package is really worth, and legal rights with a jurisdiction,” said Brinda Kirpalani, head of credit and convertible research at ADI Alternative Investments SA in Paris.

The waterfront project was among Dubai World’s most ambitious. Posters advertising the project had lined a 30-foot- high wall that stretched for more than a mile along Sheikh Zayed Road surrounding part of the land. The posters were removed in the last month, replaced by smaller billboards with Nakheel’s corporate logo.

Nakheel revised its plans for the Waterfront project, which had envisioned homes for 1.5 million people, “because people are not buying and banks are not lending,” Dubai World Chairman Sultan Ahmed bin Sulayem said in February. The company has enough money to pay for 700 villas, compared with the 10,000 originally planned, he said.

The waterfront development was “essentially a doubling of Dubai,” said Masud. Besides some initial land reclamation and building work, little has taken place on the site, he said. The land backing the $3.5 billion sukuk is likely to be worth “significantly less” than the 2006 valuation, Masud estimates.

Dubai office values fell 58 percent in the year through September, according to Colliers International. House prices have plunged 50 percent from the peak last year.

Creditors seeking to enforce any mortgages, which are governed by Dubai law, would have to do so in a Dubai court, according to Mark Andrews, a London-based partner at law firm Denton Wilde Sapte LLP who is advising some sukuk-holders. The process “will be neither quick nor easy,” he said.

“Any kind of asset recovery by foreigners in Dubai is going to be extremely difficult and ultimately is going to be something that creditors would want to avoid,” Philipp Lotter, a senior vice president at Moody’s Investors Service, said in a telephone interview today. “It hasn’t been tested and you have a legal system that never had to cope with these kinds of questions.”

Nakheel sold parts of the waterfront land to private builders, while remaining as lead developer, according to brokers based in Dubai. The land sold for as much as 95 dirhams ($26) per square foot based on the project being completed, said Ian Albert, Colliers’ regional director. The value reached about 400 dirhams at the market’s peak before falling to about 70 dirhams.

“They put in the infrastructure and the utilities and then sold off serviced plots to private developers who would actually build the individual projects,” said Matthew Green, head of U.A.E. research at CB Richard Ellis Group Inc. “We are still awaiting further infrastructure for the project to move ahead and that’s unlikely to happen in the current environment.”

Nakheel’s bonds sunk to the lowest in four days on Dec. 4 as creditors held a conference call to discuss their plans.

To contact the reporters on this story: Chris Bourke in London at cbourke4@bloomberg.net; Zainab Fattah in Dubai on zfattah@bloomberg.net.

– The ruler of Dubai blasts global investors over debt crisis

3 thoughts on “Dubai World: Nakheel PJSC creditors will get barren waterfront land the size of Manhattan in default”