The one who sells US Treasuries first wins!

The problem is that everybody knows that the USS Titanic has already hit the iceberg.

Now everybody is thinking how to get away with the lifeboats without everybody else noticing it too early.

This could/will end in a bloodbath. Yes, this would be also very painful for Japan and China, but the US will be finished.

So far this is presented as speculation. If it becomes a reality and others start selling their US Treasuries as well, then the US will turn very fast into a Third World country. 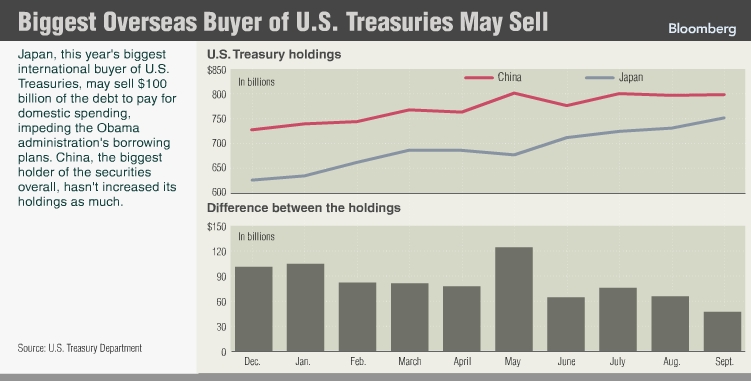 Chart of the day (Click on image to enlarge.)

Japan has been this year’s biggest buyer of Treasuries, which means it has done more to help finance the widening U.S. budget deficit than any other country. Its holdings have risen by $125.5 billion, according to data compiled by the Treasury. The comparable figure for China, which surpassed Japan last year as the largest international investor in the securities, is $71.5 billion — 43 percent lower.

The CHART OF THE DAY shows this year’s total holdings of the two countries in the top panel and tracks the gap between them in the bottom panel.

Japan will inform the U.S. about the possible $100 billion sale, according to a Market News International report yesterday that cited “rumors” from unnamed sources.

The Treasury is selling $74 billion of notes and bonds next week, along with $61 billion in three- and six-month bills, to help finance the deficit. Karthik Ramanathan, the department’s director of debt management, said a month ago that bond-market participants ought to expect $1.5 trillion to $2 trillion of sales in the fiscal year ending Sept. 30, 2010.

(To save a copy of the chart, click here.)

To contact the reporter on this story: David Wilson in New York at dwilson@bloomberg.net