Ireland could have stopped the ‘New World Order’:

(I am of course not blaming the Irish people for how they voted. After their first vote on the Lisbon Treason Treaty they were real heroes in my eyes. The only ones with brains in the EU. This madness should have been stopped a long time ago.)

Now we have an unelected Bilderberg puppet EU President:

It is not that the people are powerless, but that they are not thinking for themselves, acting like a dumb, fear driven herd of sheep in total survival mode. Such behavior assures only one outcome: The people will get slaughtered by the elite.

“What good fortune for governments that the people do not think.” – Adolf Hitler 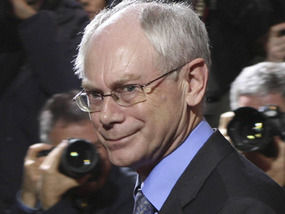 New EU President Herman van Rompuy and Brussels chiefs toasted victory as the Lisbon Treaty, which moves vast swathes of power from Westminster, ­became law across the EU at midnight on Monday.

Mr van Rompuy and EU foreign affairs chief Baroness Cathy Ashton were among the EU bureaucrats who cheered the landmark occasion at a glittering ceremony and banquet in the Portuguese capital.

But in Britain, angry anti-EU ­critics declared that it signalled the end of our independence after the latest massive surrender of sovereignty to Brussels.

Campaigners have pledged to fight on against the emergence of a Brussels superstate.

UK Independence Party Euro MP Nigel Farage said: “This day should go down in history as National Loss of Independence Day. We now live in a new legal order. We are just a province of a new legal entity called Europe.”

UKIP yesterday launched a national campaign for a referendum on whether Britain should quit the EU. Tory MP Douglas Carswell said: “Britain has ceased to be a sovereign country. Shamefully, the freedoms our forefathers fought for have been given away by the politicians at Westminster. We need a referendum now.”

Tory Euro MP Daniel Hannan said: “It is appalling, demeaning, disgraceful that such a thing should have been done without popular consent and in the absence of the referendum that all three parties had promised.”

The Lisbon Treaty abolishes dozens of national vetoes over Brussels decision-making and creates the unelected post of President of the Council of the European Union. Mr Rompuy, the little-known Belgium Prime Minister, formally takes up that post on January 1.

Last night the Tory leadership condemned the treaty as a “denial of democracy” but conceded David Cameron will have to work within the framework if he becomes Prime Minister.

Shadow Europe Minister Mark Francois said: “Now that the Treaty is ratified we need to do what we can to sort out this mess. We should have British guarantees to fix how the worst parts of the treaty would apply to us.

“We must make sure this can never happen again by changing the law to make referendums compulsory on any new treaty that would hand over areas of power from Britain to the EU.”

But Downing Street officials attempted to play down the significance of it yesterday.

The Prime Minister’s spokesman claimed former Labour minister Baroness Cathy Ashton’s appointment was a cause for ­celebration. He said: “It can only be good for Britain.”

But former EU foreign affairs spokesman Javier Solana gave a glimpse of the true impact of the treaty. He said: “I hope very much people are sensible and realise it is a fantasy to think any EU nation can do anything alone.”

Swedish Prime Minister Fredrik Reinfeldt, whose country holds the rotating EU presidency until the end of the year, said: “Today the EU is a force to be reckoned with, both economically and politically. A new era of European cooperation beings today.”

But scepticism about the treaty appears to be spreading across Europe.

An article in the German newspaper Die Welt yesterday warned: “Through the treaty, Europe will neither become more effective nor more democratic, neither more transparent nor more open.”

Lorraine Mullally, of Euro-sceptic think-tank Open Europe, said: “As of today, there is virtually no area of policy the EU cannot now touch.

“Unaccountable, unelected EU politicians and judges have sweeping new ­powers over everything from our criminal justice systems to asylum ­policy.”