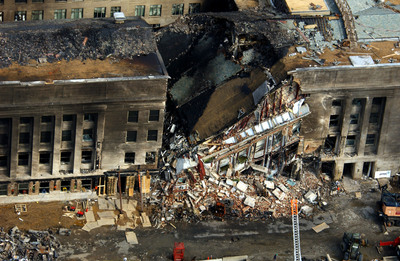 This aerial photograph of the Pentagon taken on Sept. 14, 2001, shows some of the destruction caused when the hijacked American Airlines flight slammed into the building on Sept. 11. The terrorist attack caused extensive damage to the west face of the building and followed similar attacks on the twin towers of the World Trade Center in New York City. DoD photo by Tech. Sgt. Cedric H. Rudisill. Source: Department of Defense

(PilotsFor911Truth.org) – Newly decoded data provided by an independent researcher and computer programmer from Australia exposes alarming evidence that the reported hijacking aboard American Airlines Flight 77 was impossible to have existed. A data parameter labeled “FLT DECK DOOR”, cross checks with previously decoded data obtained by Pilots For 9/11 Truth from the National Transportation Safety Board (NTSB) through the Freedom Of Information Act.

On the morning of September 11, 2001, American Airlines Flight 77 departed Dulles International Airport bound for Los Angeles at 8:20 am Eastern Time. According to reports and data, a hijacking took place between 08:50:54 and 08:54:11[1] in which the hijackers allegedly crashed the aircraft into the Pentagon at 09:37:45. Reported by CNN, according to Ted Olson, wife Barbara Olson had called him from the reported flight stating, “…all passengers and flight personnel, including the pilots, were herded to the back of the plane by armed hijackers…”[2]. However, according to Flight Data provided by the NTSB, the Flight Deck Door was never opened in flight. How were the hijackers able to gain access to the cockpit, remove the pilots, and navigate the aircraft to the Pentagon if the Flight Deck Door remained closed?[3]

Founded in August 2006, Pilots For 9/11 Truth is a growing organization of aviation professionals from around the globe. The organization has analyzed Data provided by the National Transportation Safety Board (NTSB) for the Pentagon Attack, the events in Shanksville, PA and the World Trade Center attack. The data does not support the government story. The NTSB/FBI refuse to comment. Pilots For 9/11 Truth do not offer theory or point blame at this point in time. However, there is a growing mountain of conflicting information and data in which government agencies and officials along with Mainstream Media refuse to acknowledge. Pilots For 9/11 Truth Core member list continues to grow.