Gold hit a record high above $1,194 on Thursday as the dollar index fell to its lowest in 15 months, raising hopes that central banks would jump in to buy more bullion in their effort to hedge against a falling currency.

The rise took gold price gains to around 15 percent since the beginning of November, with demand fuelled by expectations of further reserve diversification and fears about inflation in 2010.

“Everybody is bullish on gold, and everybody is looking at the signal central banks are sending,” said Dick Poon, manager of precious metals at Heraeus in Hong Kong.

“It’s not just India or China, but most of the central banks, as well as funds, have changed their portfolios to include gold. So, everybody is looking at how much money they will invest in gold,” he said. 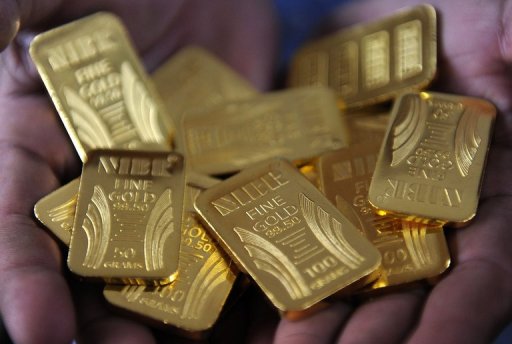 WASHINGTON — The International Monetary Fund said Wednesday it had sold 10 tonnes of gold to Sri Lanka’s central bank for 375 million dollars, as part of a restructuring of IMF financial resources.

It was the third IMF sale of gold in a month as the Washington-based institution seeks to reduce its dependence on lending revenue and bolster its finances amid the global economic crisis.

“The sale was conducted on the basis of market prices prevailing on” Monday, the IMF said in a statement.

Gold prices had hit a record high that day, topping 1,170 dollars an ounce. Since then, the price of the precious metal has soared higher to new all-time peaks as investors seek a safe haven amid economic uncertainty.

The sale brought the total IMF gold sold to central banks to 212 tonnes. India bought 200 tonnes between October 19 and 30 for 6.7 billion dollars and Mauritius bought two tonnes on November 11 for 71.7 million dollars.

Sri Lanka has a 20-month IMF loan of 2.7 billion dollars that was awarded in July after the island nation’s reserves slumped to just over one billion dollars as the government made a final offensive to crush separatist Tamil Tiger rebels.

Sri Lanka’s central bank in early November said it has been buying gold to diversify its reserves amid volatile currency markets but refused to reveal from which sources the bank was buying the gold or at what prices.

The IMF executive board approved the sale of 403.3 tonnes of gold in September. The fund, which currently holds roughly 3,000 tonnes of gold, is the world’s third-largest official holder of the precious metal after the United States and Germany.

Gold and other commodity prices have surged in recent months amid a move away from a sliding dollar. The metal is also winning support over fears about a spike in inflation, as gold is widely regarded as a safe store of value.

The IMF said it would sell gold directly to central banks and other official holders for an initial period before selling the remaining amount on the open markets “in a phased manner over time,” in line with an approach used by central banks to avoid market disruptions.