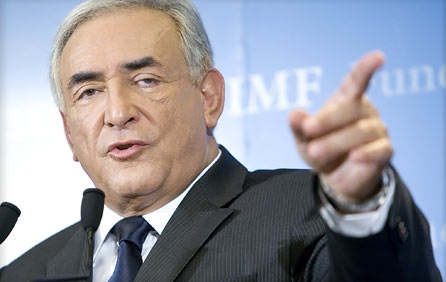 The public will not bail out the financial services sector for a second time if another global crisis blows up in four or five years time, the managing-director of the International Monetary Fund warned this morning.

Dominique Strauss-Kahn told the CBI annual conference of business leaders that another huge call on public finances by the financial services sector would not be tolerated by the “man in the street” and could even threaten democracy.

“Most advanced economies will not accept any more [bailouts]…The political reaction will be very strong, putting some democracies at risk,” he told delegates.

“I do believe that the financial sector needs to contribute both to the costs of the financial crisis and to reduce recourse to public funds in the future,” he said.

Mr Strauss-Kahn said that imposing high capital ratio requirements on banks was one price the financial services sector must pay to prevent the threat of further multi-billion dollar bailouts.

He pointed to the debate in the US over the Troubled Asset Relief Programme and said that in many countries, including France and Germany, he doubted that politicians would secure the mandate needed to secure any further bail-outs if banks got in to trouble again, in several years’ time.

Europe is in dispute over the spiralling cost of the global economic bailout, with Germany and France calling for a reduction in state support as their economies have shown signs of an upturn.

In September, George Osborne, the Shadow Chancellor, sided with Germany and France, accusing Gordon Brown of being in “complete denial” over the mounting bill of the financial rescue packages and agreed with Britain’s neighbours that it was time to look for an exit strategy. Countries are recovering from recession at different rates, with Britain lagging behind.

Mr Strauss-Kahn said that while the global economy had made “remarkable” progress in exiting recession, and was on the cusp of recovery, it remained “highly vulnerable” to shocks.

He said state support for the world’s battered economies must remain in place if a smooth recovery is to be achieved.

“We recommend erring on the side of caution as exiting too early is costlier than exiting too late.”

Mr Strauss-Kahn is one of a series of high-profile speakers at the CBI conference, in Central London. Gordon Brown, David Cameron and Nick Clegg will all speak at the event as they seek to sway influential business leaders before a general election next year.

In his speech, Mr Strauss-Kahn also warned that the huge amounts of capital being pumped into China could fuel a pan-Asian bubble.

His comments come after warnings from economists that the economic conditions in China and the rest of Asia are such that asset prices could rip free of their fundamental values unless the bubble threat is addressed.

The Chinese banking sector is currently the scene of an unprecedented frenzy of new lending, which could reach up to 11,000 billion yuan (£97.7 billion) by the end of this year.

Mr Strauss-Khan said that the old paradigm of growth generation based on households in the US was dead. The future sources of growth and the recovery will “depend on a new balance between the US and deficit countries on one hand and emerging markets and surplus countries on the other”.

Emerging markets will provide some of the growth that the US can no longer offer, however he warned that while China and other emerging Asian economies were shifting from exports to domestic demand, they still had some way to go.