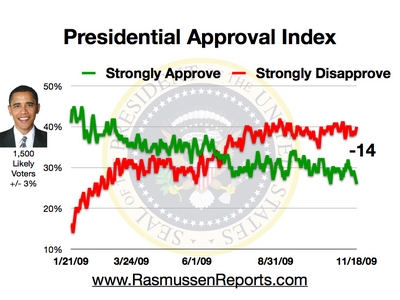 Over the past month, the number who Strongly Approve of the President’s performance has generally stayed between 27% and 30% (with one exception in each direction). Today’s drop to 26% matches the lowest level of strong approval yet recorded.

The number who Strongly Disapprove has stayed between 37% and 41% every day for over a month. The only previous time that Obama’s Approval Index rating was this low came on August 23. It remains to be seen whether the current low is just statistical noise or if it is something more lasting.

Just 47% of Democrats now Strongly Approve of the President’s performance. Sixty-eight percent (68%) of Republicans Strongly Disapprove, as do 43% of those not affiliated with either major political party. These numbers reflect the concern some Democratic analysts are voicing about an enthusiasm gap heading into the 2010 mid-term elections. See other recent demographic highlights.

Overall, 47% of voters say they at least somewhat approve of the President’s performance. That figure includes 40% of voters not affiliated with either major party. Overall, among all voters, 52% now disapprove.

Republicans continue to hold a six-percentage point lead on the Generic Congressional Ballot.

Just 29% agree with the decision to try Khalid Shaikh Mohammed and five other terrorists suspects in a New York city courtroom. Only 14% believe terrorist suspects should receive the same legal rights in court as U.S. citizens.

Scott Rasmussen and Doug Schoen have a column in Saturday’s Wall Street Journal noting that Obama is losing Independent voters. Rasmussen has recently had three other columns published in the Journal analyzing health care, the President’s approval ratings, and how Obama won the White House by campaigning like Ronald Reagan. If you’d like Scott Rasmussen to speak at your meeting, retreat, or conference, contact Premiere Speakers Bureau. You can also learn about Scott’s favorite place on earth or his time working with hockey legend Gordie Howe.

Support for the health care plan working its way through Congress is up to 47%, but 49% remain opposed.

Fifty-nine percent (59%) of Republican voters say that Sarah Palin shares their values. Just 18% see her as a divisive force within the GOP.

It is important to remember that the Rasmussen Reports job approval ratings are based upon a sample of likely voters. Some other firms base their approval ratings on samples of all adults. President Obama’s numbers are always several points higher in a poll of adults rather than likely voters. That’s because some of the President’s most enthusiastic supporters, such as young adults, are less likely to turn out to vote. 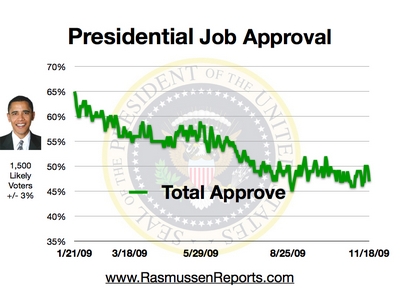 Rasmussen Reports has been a pioneer in the use of automated telephone polling techniques, but many other firms still utilize their own operator-assisted technology (see methodology).

Pollster.com founder Mark Blumenthal noted that “independent analyses from the National Council on Public Polls, the American Association for Public Opinion Research, the Pew Research Center, the Wall Street Journal and FiveThirtyEight.com have all shown that the horse-race numbers produced by automated telephone surveys did at least as well as those from conventional live-interviewer surveys in predicting election outcomes.”

In the 2009 New Jersey Governor’s race, automated polls tended to be more accurate than operator-assisted polling techniques. On reviewing the state polling results from 2009, Mickey Kaus offered this assessment, “If you have a choice between Rasmussen and, say, the prestigious N.Y. Times, go with Rasmussen!”

Additionally, an analysis by Pollster.com partner Charles Franklin “found that despite identically sized three-day samples, the Rasmussen daily tracking poll is less variable than Gallup.” During Election 2008, the Rasmussen Reports daily Presidential Tracking Poll was the least volatile of all those tracking the race. That stability is one reason that Nate Silver of fivethirtyeight.com said that the Rasmussen tracking poll “would probably be the one I’d want with me on a desert island.”

A Fordham University professor rated the national pollsters on their record in Election 2008. We also have provided a summary of our results for your review. In 2008, Obama won 53%-46% and our final poll showed Obama winning 52% to 46%. While we were pleased with the final result, Rasmussen Reports was especially pleased with the stability of our results. On every single day for the last six weeks of the campaign, our daily tracking showed Obama with a stable and solid lead attracting more than 50% of the vote.

Daily tracking results are collected via telephone surveys of 500 likely voters per night and reported on a three-day rolling average basis. The margin of sampling error-for the full sample of 1,500 Likely Voters–is +/- 3 percentage points with a 95% level of confidence. Results are also compiled on a full-week basis and crosstabs for full-week results are available for Premium Members.

Like all polling firms, Rasmussen Reports weights its data to reflect the population at large (see methodology). Among other targets, Rasmussen Reports weights data by political party affiliation using a dynamic weighting process. While partisan affiliation is generally quite stable over time, there are a fair number of people who waver between allegiance to a particular party or independent status. Over the past five years, the number of Democrats in the country has increased while the number of Republicans has decreased.

Our baseline targets are established based upon separate survey interviews with a sample of adults nationwide completed during the preceding three months (a total of 45,000 interviews) and targets are updated monthly. Currently, the baseline targets for the adult population are 37.5% Democrats, 32.2% Republicans, and 30.3% unaffiliated. Likely voter samples typically show a slightly smaller advantage for the Democrats.

A review of last week’s key polls is posted each Saturday morning. Other stats on Obama are updated daily on the Rasmussen Reports Obama By the Numbers page. We also invite you to review other recent demographic highlights from the tracking polls.

Change you can believe in!:

– Government report: 15% of Americans have trouble putting food on the table – a record high

– President Obama: CONTINUATION OF THE NATIONAL EMERGENCY WITH RESPECT TO IRAN

–Congressman Ron Paul on the Copenhagen Treaty and the Cyber Security Act: ‘They are doing everything in the world to control the internet.’

– President Obama gets a seasonal flu shot, but not for swine flu

– Congressman Dennis Kucinich on ‘OBAMACARE’: ‘The insurance companies are going to get a windfall’

– US Senate must raise debt ceiling above $12 trillion; “America has a debt problem and a failure of leadership.” – Barack Obama

– US: THIS is Big Government

– Bill Would Give President Obama Emergency Control of Internet

– Healthcare insurers get a financial ‘bonanza’

– Obama’s first act as President of the US: EXECUTIVE ORDER 13489 – Banning release of any of his records

– Glenn Beck: What the Media Refuses to Tell You About Rahm Emanuel