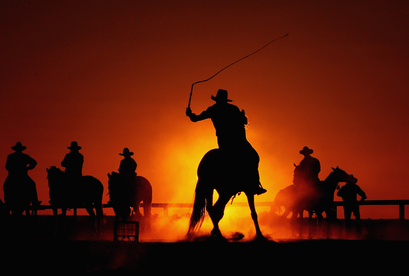 But it’s nothing like the old Westerns, Willis said.

“I haven’t seen any romance in any of the cattle thieving I’ve been involved in,” he said.

“If it wasn’t cattle, it would be something else they’d be stealing,” he said.

Ranchers such as Sammy Ward said they fear the increase in cattle thefts is tied to the economic recession.

“But I think the worse the economy gets, you’re going to see more,” he said.

The victims are often small ranchers, and the loss cuts deep.

“One rancher I’ve been working a theft case on July — he lost about $30,000 worth of livestock, and it’s impacted him,” Willis said. “That’s a pretty good lick.”

The thieves can be hard to catch, Willis said. Stolen cattle are often sold quickly at auctions. Some are sold out of state — or even on the street.

“Some boys we caught here a while back, they actually sold one at a convenience store to another (rancher),” Willis said. “I mean, he just thought he was getting a pretty good deal.”

Texas recently toughened the penalty for cattle rustling from two years in prison to 10 years. Of course that’s mild compared to the old vigilante justice, when rustlers were hanged from the nearest tree.

To prevent thefts, the Texas and Southwestern Cattle Raisers Association is stationing inspectors at auction barns across the state to check tags and brands and try to identify stolen cattle before they’re sold.