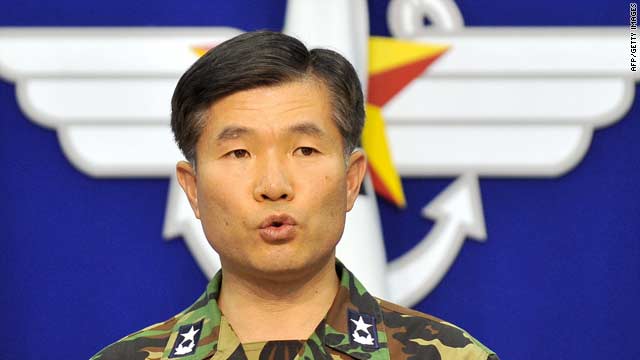 The two Koreas clashed off their west coast, the first such incident in seven years, each blaming the other for the incident.

South Korean President Lee Myung-bak convened an emergency security meeting and urged the military to to ensure that the naval clash did not escalate into something greater, Yonhap reported.

South Korea issued three verbal warnings to ship from the Communist north once the vessel had crossed a demarcation line late Tuesday morning, said Rear Adm. Lee Ki Sik of the Joint Chiefs of Staff. The South Koreans then fired a warning shot but when the North Korean vessel continued southward, the South Koreans opened fire.

The North Koreans returned fire before heading back, their ship damaged in the exchange, Lee said. There were no South Korean casualties, Lee said.

U.S. President Barack Obama is scheduled to visit South Korea as part of a trip to Asia beginning Thursday.

The reclusive Communist state pulled out of nuclear talks in April to protest the United Nations’ condemnation over its nuclear test and missile launches. It has accused Washington of violating its sovereignty by singling it out and reporting it to the United Nations Security Council.

Another South Korean official told the nation’s semi-official Yonhap News Agency that South Korea was not ruling out “the possibility that the clash may have been accidental.”

North Korea, however, defended its actions.

The patrol boat was on “routine guard,” according to a North Korean army report cited by the official Korean Central News Agency (KCNA), and the incident occurred because of “provocation perpetrated by the South Korean forces in the waters of the north side.”

“The South Korean military authorities should make an apology to the North side for the armed provocation and take a responsible measure against the recurrence of the similar provocation,” said the report.

North and South Korea have been bitterly divided since the 1950-53 war between them ended without a peace treaty.

There was, however, an armistice with the U.N. Command establishing the Northern Limit Line (NLL), a demarcation on the Yellow Sea designed to avert clashes at sea. But the two nations dispute the exact location of the sea border and North Korea does not observe the line.

Clashes have occurred before in the Yellow Sea, especially during crab fishing season, according to the defense news Web site Globalsecurity.org. Since 2001, North Korean vessels have crossed the NLL 65 times — 22 were this year — though most of these incidents do not turn violent.

The first clash since the Korean War that turned deadly occurred in June 1999 when a North Korean ship was sunk. And in 2002, a series of North Korean incursions sparked an exchange that killed six South Korean sailors and wounded nine others.