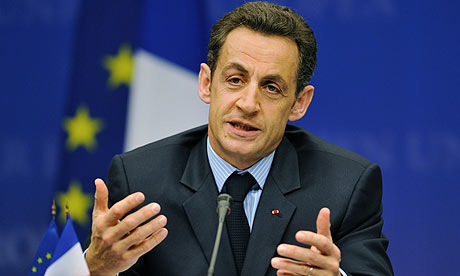 French financial watchdogs slammed Nicolas Sarkozy for spending £160m during his country’s six-month stint in charge of the EU – including £250,000 on a personal presidential shower that he never used.

The vast expense is set out in a report blaming poor management and a lack of transparency by the president’s staff.

Costs soared because so many of the EU-related events were organised at the last minute, said the report.

On one occasion Sarkozy triggered the cancellation of an entire EU event he was due to host in Evian, because he wanted to sleep in his own bed at the Élysée palace. By then, hundreds of journalists, EU officials and national delegations had either already arrived in Evian or were on their way.

The total for Sarkozy’s time at the helm of the EU is set out in figures published by the French national audit office.

Every government likes to showcase its country when holding the EU presidency, which at present rotates from country to country every six months. National funds are topped up with EU budget support to organise summits, informal ministerial meetings and EU-related promotional events, conferences and policy programmes. Funding is shared between national and regional authorities and the EU budget.

For one three-day event alone, Sarkozy sanctioned an elaborate upgrade of the Grand Palace in Paris for an EU-Mediterranean summit – one of his pet initiatives to mark his turn at the EU helm.

The event was one of his final EU presidency flourishes last July, and involved hundreds of workmen and millions of pounds.

“The Grand Palace had to be completely refitted for the occasion. Five hundred technicians were mobilised every day, including 300 at night,” said the report. Spending included nearly £1m for one dinner for more than 40 government leaders and heads of state who attended the event.

The audit report said the cost soared because of the complications of installing a state-of-the-art shower to the president’s specifications in a listed building.

The president never used it – instead going back to the Élysée palace during the three-day summit to freshen up. The shower has since been dismantled.

Other spending on the summit included £90,000 for a carpet.

In all there were about 500 presidency-related events during the six months, but Jean Arthuis, the head of the French senate finance committee, said not all of them were essential, and not all contributed to French success in its EU presidency.

He described French EU presidential accounting as “opaque”, saying it was hard to establish who paid for what.