Congresswoman Marcy Kaptur has become something of a crusader for homeowners’ rights in the wake of the housing crisis, as well as a major critic of US banks. Moyers played a clip of her giving a speech this past January in which she urged homeowners to ignore eviction notices and become “squatters in [their] own homes” if they need to:

“So why should any American citizen be kicked out of their homes in this cold weather? … Don’t leave your home. Because you know what? When those companies say they have your mortgage, unless you have a lawyer that can put his or her finger on that mortgage, you don’t have that mortgage, and you are going to find they can’t find the paper up there on Wall Street. So I say to the American people, you be squatters in your own homes. Don’t you leave. In Ohio and Michigan and Indiana and Illinois and all these other places our people are being treated like chattel, and this Congress is stymied.”

See also: Congresswoman Marcy Kaptur: There Has Been a Financial Coup D’Etat 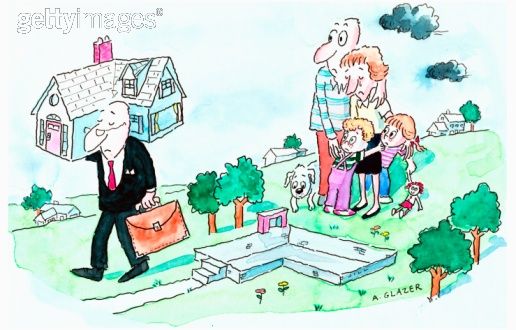 FOR decades, when troubled homeowners and banks battled over delinquent mortgages, it wasn’t a contest. Homes went into foreclosure, and lenders took control of the property.

On top of that, courts rubber-stamped the array of foreclosure charges that lenders heaped onto borrowers and took banks at their word when the lenders said they owned the mortgage notes underlying troubled properties.

In other words, with lenders in the driver’s seat, borrowers were run over, more often than not. Of course, errant borrowers hardly deserve sympathy from bankers or anyone else, and banks are well within their rights to try to protect their financial interests.

Even so, banks and borrowers still do battle over foreclosures on an unlevel playing field that exists in far too many courtrooms. But some judges are starting to scrutinize the rules-don’t-matter methods used by lenders and their lawyers in the recent foreclosure wave. On occasion, lenders are even getting slapped around a bit.

One surprising smackdown occurred on Oct. 9 in federal bankruptcy court in the Southern District of New York. Ruling that a lender, PHH Mortgage, hadn’t proved its claim to a delinquent borrower’s home in White Plains, Judge Robert D. Drain wiped out a $461,263 mortgage debt on the property. That’s right: the mortgage debt disappeared, via a court order.

So the ruling may put a new dynamic in play in the foreclosure mess: If the lender can’t come forward with proof of ownership, and judges don’t look kindly on that, then borrowers may have a stronger hand to play in court and, apparently, may even be able to stay in their homes mortgage-free.

The reason that notes have gone missing is the huge mass of mortgage securitizations that occurred during the housing boom. Securitizations allowed for large pools of bank loans to be bundled and sold to legions of investors, but some of the nuts and bolts of the mortgage game — notes, for example — were never adequately tracked or recorded during the boom. In some (many) cases, that means nobody truly knows who owns what.

To be sure, many legal hurdles mean that the initial outcome of the White Plains case may not be repeated elsewhere. Nevertheless, the ruling — by a federal judge, no less — is bound to bring a smile to anyone who has been subjected to rough treatment by a lender. Methinks a few of those people still exist.

More important, the case is an alert to lenders that dubious proof-of-ownership tactics may no longer be accepted practice. They may even be viewed as a fraud on the court.

The United States Trustee, a division of the Justice Department charged with monitoring the nation’s bankruptcy courts, has also taken an interest in the White Plains case. Its representative has attended hearings in the matter, and it has registered with the court as an interested party.

THE case involves a borrower, who declined to be named, living in a home with her daughter and son-in-law. According to court documents, the borrower bought the house in 2001 with a mortgage from Wells Fargo; four and a half years later she refinanced with Mortgage World Bankers Inc.

She fell behind in her payments, and David B. Shaev, a consumer bankruptcy lawyer in Manhattan, filed a Chapter 13 bankruptcy plan on her behalf in late February in an effort to save her home from foreclosure.

Mr. Shaev said that when he filed the case, he had simply hoped to persuade PHH to modify his client’s loan. But after months of what he described as foot-dragging by PHH and its lawyers, he asked for proof of PHH’s standing in the case.

“If you want to take someone’s house away, you’d better make sure you have the right to do it,” Mr. Shaev said in an interview last week.

In answer, Mr. Shaev received a letter stating that PHH was the servicer of the loan but that the holder of the note was U.S. Bank, as trustee of a securitization pool. But U.S. Bank was not a party to the action.

Mr. Shaev then asked for proof that U.S. Bank was indeed the holder of the note. All that was provided, however, was an affidavit from Tracy Johnson, a vice president at PHH Mortgage, saying that PHH was the servicer and U.S. Bank the holder.

Among the filings supplied to support Ms. Johnson’s assertion was a copy of the assignment of the mortgage. But this, too, was signed by Ms. Johnson, only this time she was identified as an assistant vice president of MERS, the Mortgage Electronic Registration System. This bank-owned registry eliminates the need to record changes in property ownership in local land records.

Another problem was that the document showed the note was assigned on March 26, 2009, well after the bankruptcy had been filed.

Mr. Shaev’s questions about ownership also led to an admission by PHH that, along the way, it had levied an improper $450 foreclosure fee on the borrower and had overcharged interest by an unstated amount.

John DiCaro, a lawyer representing PHH at the hearing, was in the uncomfortable position of having to explain why there was no documentation of an assignment to U.S. Bank. He did not return a phone call seeking comment last week. Ms. Johnson, who couldn’t be reached for comment, did not attend the hearing.

According to a transcript of the Sept. 29 hearing, Mr. DiCaro said: “In the secondary market, there are many cases where assignment of mortgages, assignment of notes, don’t happen at the time they should. It was standard operating procedure for many years.”

Judge Drain rejected that argument, concluding that what had been presented to the court just did not add up. “I think that I have a more than 50 percent doubt that if the debtor paid this claim, it would be paying the wrong person,” he said. “That’s the problem. And that’s because the claimant has not shown an assignment of a mortgage.”

Mr. Shaev said he was shocked when the judge expunged the mortgage debt.

“We are in uncharted territory,” he said. “Right now I am in bankruptcy court with a house that has no discernible debt on it, yet I have a client with a signed mortgage. We cannot in theory just go out and sell this house because the title company won’t give a clear title on it.”

Among the next steps Mr. Shaev said he would take is to file an amended plan or sue to try to get clear title to the property.

Late last week, PHH appealed the judge’s ruling. But Mr. DiCaro and PHH are in something of a bind. Either they will return to court with a clear claim on the property — including all the transfers and sales that are necessary in the securitization process — or they won’t be able to produce that documentation. If they do produce it, they will then have to explain why they didn’t produce it before.

Oh, what a tangled web these mortgage lenders weave.

3 thoughts on “To all homeowners in foreclosure: Judge wipes out $460,000 mortgage debt”