Thousands of activists monitored on network of overlapping databases 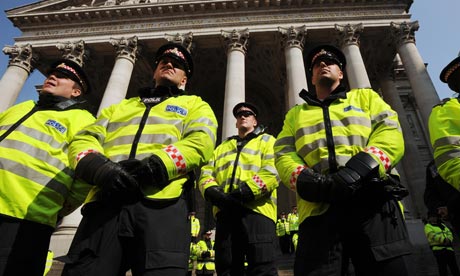 Detailed information about the political activities of campaigners is being stored on IT systems. Photograph: Fiona Hanson/PA

Police are gathering the personal details of thousands of activists who attend political meetings and protests, and storing their data on a network of nationwide intelligence databases.

The hidden apparatus has been constructed to monitor “domestic extremists”, the Guardian can reveal in the first of a three-day series into the policing of protests. Detailed information about the political activities of campaigners is being stored on a number of overlapping IT systems, even if they have not committed a crime.

Senior officers say domestic extremism, a term coined by police that has no legal basis, can include activists suspected of minor public order offences such as peaceful direct action and civil disobedience.

Three national police units responsible for combating domestic extremism are run by the “terrorism and allied matters” committee of the Association of Chief Police Officers (Acpo). In total, it receives £9m in public funding, from police forces and the Home Office, and employs a staff of 100.

An investigation by the Guardian can reveal:

Denis O’Connor, the chief inspector of constabulary, will next month release the findings of his national review of policing of protests. He has already signalled he anticipates wide scale change. His inspectors, who were asked to review tactics in the wake of the Metropolitan police’s controversial handling of the G20 protests, are considering a complete overhaul of the three Acpo units, which they have been told lack statutory accountability.

Acpo’s national infrastructure for dealing with domestic extremism was set up with the backing of the Home Office in an attempt to combat animal rights activists who were committing serious crimes. Senior officers concede the criminal activity associated with these groups has receded, but the units dealing with domestic extremism have expanded their remit to incorporate campaign groups across the political spectrum, including anti-war and environmental groups that have only ever engaged in peaceful direct action.

Anton Setchell, who is in overall command of Acpo’s domestic extremism remit, said people who find themselves on the databases “should not worry at all”. But he refused to disclose how many names were on the NPOIU’s national database, claiming it was “not easy” to count. He estimated they had files on thousands of people. As well as photographs, he said FIT surveillance officers noted down what he claimed was harmless information about people’s attendance at demonstrations and this information was fed into the national database.

He said he could understand that peaceful activists objected to being monitored at open meetings when they had done nothing wrong. “What I would say where the police are doing that there would need to be the proper justifications,” he said.