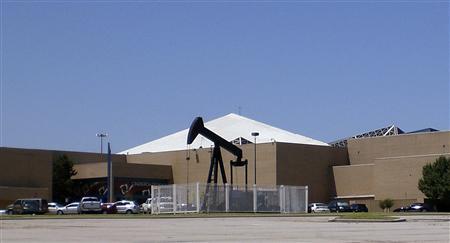 OKLAHOMA CITY (Reuters) – A $29 billion trail from the Federal Reserve’s bailout of Wall Street investment bank Bear Stearns ends in a partially deserted shopping center on a bleak spot on the south side of Oklahoma City.

The Fed now owns the Crossroads Mall, a sprawling shopping complex at the junction of Interstate highways 244 and 35, complete with an oil well pumping crude in the parking lot — except the Fed does not own the mineral rights.

The Fed finds itself in the unusual situation of being an Oklahoma City landlord after it lent JPMorgan Chase $29 billion to buy Bear Stearns last year.

That money was secured by a portfolio of Bear assets. Crossroads Mall is the only bricks and mortar acquired through bailout. The remaining billions are tied up in invisible securities spread across hundreds, if not thousands, of properties.

It is hard to be precise because the Fed has not published specifics on what it now owns. The only reason that Crossroads Mall has surfaced is that it went into foreclosure in April.

Noah Diggs, who had just successfully concluded a search for work here as a shop assistant, was surprised and somewhat alarmed to learn the U.S. central bank now owned the property.

“That is a bad thing, right?” he said, surveying the empty parking lot on a rainy morning in early October.

Public anger over the bailout of rich Wall Street bankers has evolved into wider opposition toward government intrusion into the private sector, complicating President Barack Obama’s efforts to reform financial regulation and healthcare.

The controversial action to save Bear Stearns in March 2008 was defended as less damaging for the U.S. economy than letting it fail. The merit of this argument was underscored in September 2008 when rival investment bank Lehman Brothers foundered, sparking a global financial panic.

But paper losses to the Fed on the Bear Stearns rescue stood somewhat above $3 billion at the last quarterly valuation in June, contributing to the disquiet that has hardened political opposition toward granting the Fed any more power.

This was a central part of Obama’s proposed financial reform rules that he says would prevent in the future the kind of systemic failure that sent financial markets and the economy into a tailspin last year.

Part of the public concern stems from the sheer scale and complexity of the bailouts and what they will eventually cost taxpayers, with the assets shrouded in oddly named limited liability companies held by the New York Federal Reserve Bank, one of the 12 regional Fed banks in the U.S. central banking system.

On top of Bear Stearns, the Fed lent $60 billion to prop up insurance giant American International Group a few days after Lehman went under, and is also standing behind over $400 billion of assets owned by Citigroup Inc and Bank of America Corp.

In fairness, the Bear Stearns losses so far are relatively small compared to the size of the overall portfolio, or indeed the Fed’s current overall balance sheet of $2.1 trillion.

THE CHALLENGE FACING THE FED

But a drab shopping mall illustrates the wider challenge of extricating the Fed from its foray into private finance, especially in commercial real estate where sinking property values raise the threat of big loan losses.

“What the Fed and banks have said they are worried about is a new wave of losses on commercial real estate and here is an example of an early adopter in the Fed’s portfolio,” said Lou Crandall, chief economist at Wrightson ICAP in Jersey City, New Jersey.

“The fact that the thing was written so that the Fed does not have the oil rights is just classic. Not that that is the Fed’s fault,” he said.

Crossroads Mall, half-empty after anchor stores Macy’s, JC Penney, Montgomery Ward and Dillard’s all pulled out, was brought out of foreclosure in April with $77 million in debt, according to Ann Marie Randolph at the Oklahoma County Sheriff’s office. It is now up for sale for $24 million.

Paul Ravencraft, an investment broker with Price Edwards and Co. in Oklahoma City retained by the Fed to sell the property, said the current sales climate was tough.

“Financing will be difficult, and it will probably require a lot of equity,” he said.

Losses are potentially at taxpayer’s expense because the Fed generally makes a fat annual profit running the country’s payments system and other operations, and any losses reduce how much it can pay out to the U.S. Treasury, and hence taxpayers.

The Fed’s $29 billion bailout of Bear Stearns was secured by a portfolio of Bear assets that included $5.5 billion in commercial loans, including the note on Crossroads Mall that went into default.

A big part of the portfolio — $16.4 billion at the end of June — consists of debt issued by government-owned agencies like Fannie Mae and Freddie Mac, which continue to pay out.

But the value of the commercial loan holdings has already been written down to $4.4 billion.

In part, this decline in value is because two other pieces of the Bear Stearns collateral — Extended Stay Hotels, and the GrandStay Residential Suites Hotels in Oxnard, California — have sought court bankruptcy protection.

Extended Stay owes the Fed almost $900 million, consisting of $153 million in commercial mortgage-backed securities and $744 million in junior mezzanine debt, while GrandStay won Chapter 11 bankruptcy protection with a bit under $10 million in debt.

Joseph Sholder, the Santa Barbara lawyer acting for GrandStay, was startled to discover that the lender who had tried to take control of the property was the Federal Reserve.

The Fed created a special vehicle called Maiden Lane to hold the assets on its balance sheet pledged against the Bear loan. Maiden Lane is the name of the lower Manhattan street behind the New York Fed’s building.

However, Sholder said that on reflection, he really should not be so surprised by the news of the Fed’s involvement.

“They seem to have their finger in every pie,” he said.