City bank Goldman Sachs is expected to confirm tomorrow that bonuses will smash all records in 2009, just a year after the Government rescued the financial system from oblivion.

The Wall Street giant is on course to lavish £14 billion on pay and bonuses on staff this year following a surge in profits between July and September, experts said. 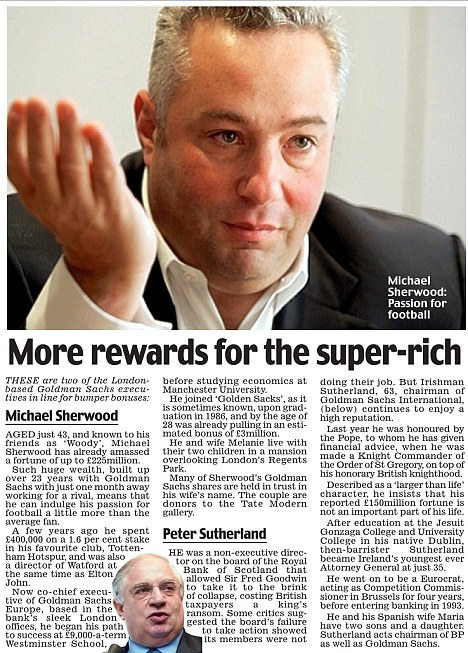 The return to business as usual for the so-called ‘Masters of the Universe’ of the Square Mile will anger the millions of families whose finances have been devastated by the financial crisis.

It will also embarrass Chancellor Alistair Darling, who has vowed to eradicate the culture of greed and recklessness that spawned the financial crisis.

Vince Cable, the Treasury spokesman for the Liberal Democrat, said: ‘The Government has pontificated at great length but has done very little to curb excessive risk taking in the banking industry.’

Goldman will not pay out bonuses to staff until the end of the year after calculating how much money it has made during 2009.

The bulk is expected to be paid in shares and could be staggered over a number of years.

To comply with new rules on pay, Goldman may also introduce provisions to reclaim payments that turn out to have been unwarranted. 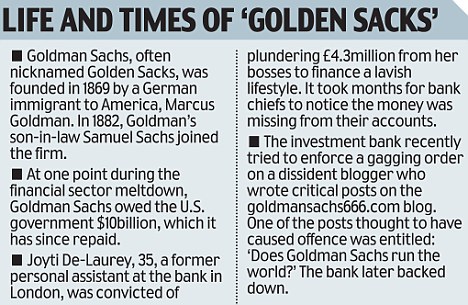 Tens of thousands of traders and dealmakers at other City banks are also set to receive life-changing windfalls at the end of the year.

Following the collapse of Lehman Brothers last autumn, banks such as Barclays and America’s J P Morgan are earning much bigger profits from arranging financing for companies.

They are also earning vast amounts for helping recession-torn governments around the world borrow the money they need to stay afloat.

The renaissance in bumper bank pay was underlined by news that eight out of ten City bankers expect to receive a bonus at least on a par with last year.

In a survey to be published this morning, recruitment firm Morgan McKinley found that a mere 20 per cent of City workers are braced for a drop in their bonus this year.

Today’s results from Goldman are expected to underline how the survivors of last autumn’s ‘great panic’ are now pocketing extravagant profits.

Experts expect the U.S. giant will set aside as much as £4billion extra for its pay and bonus pool after a jump in profits. Goldman is expected to deliver earnings of £1.5billion between July and September thanks to a boom on global stock markets.

The bank is also profiting from a wave of blockbuster cash calls by debt-laden companies.

Having advised clients to increase their borrowings during the boom years, Goldman is now banking hefty commissions for helping firms reduce their debt mountains.

Goldman is one of the Govern-ment’s favoured investment banks. It earned millions from advising the Treasury during the ill-fated search for a private sector buyer for stricken Northern Rock, which eventually had to be nationalised in early 2008.

At the current pace, Goldman is on course to pay out more than £14billion in pay and bonuses to its 29,000 staff worldwide – double last year’s level.

Goldman declined to comment last night ahead of its results.

Mr Darling will today ask around ten leading foreign banks operating in the City to sign up voluntarily to a new framework for pay and perks.