“U.S. national security adviser James Jones said last weekend that the al Qaeda presence has diminished, and he does not “foresee the return of the Taliban” to power.”

“He said that according to the maximum estimate, al Qaeda has fewer than 100 fighters operating in Afghanistan without any bases or ability to launch attacks on the West.”
Source: The San Francisco Chronicle

Looks like those dangerous terrorists are now closer to home. “Home” because it was the CIA that funded al-Qaeda in the first place. ‘Al-Qaeda’ means ‘the base’. It originally referred to an actual specific operational base for mujahideen during Soviet occupation funded by the CIA. 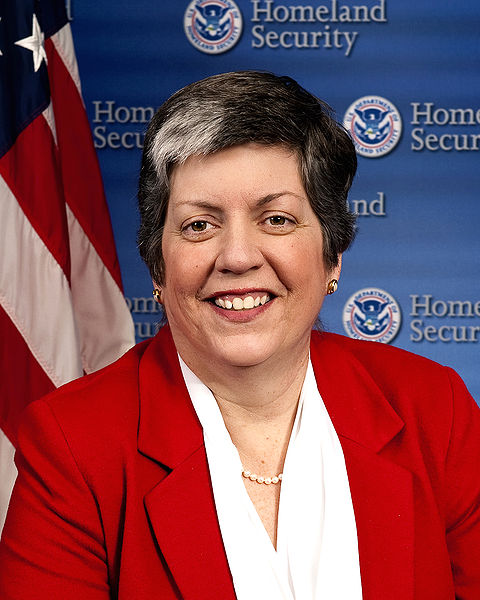 “It is fair to say there are individuals in the United States who ascribe to al-Qaeda-type beliefs,” Napolitano said in an interview with Bloomberg Television today. “And so it makes information-sharing, it makes effective law enforcement and it makes the shared responsibility of law enforcement ever so important.”

Information-sharing between federal, state and local law- enforcement agencies is “much improved” since the Sept. 11 attacks, she said.

U.S. Attorney General Eric Holder said the case had connections to al-Qaeda, the terrorist group that attacked the U.S. on Sept. 11, 2001.

The threat of attack “is always with us,” Napolitano said today. Benchmark stock indexes trimmed gains after her comments.

Napolitano, 51, made her remarks in an interview with Bloomberg reporters. She touched on a variety of areas she oversees.

Intelligence tips on terror suspects are more important than a system to track visitors leaving the country, she said. She also said better border enforcement will help make the case for immigration legislation.

The secretary said she met today with financial institutions on threats to computer systems. She said she also was in New York to appear on ABC’s “The View” and “The Daily Show with Jon Stewart” on Viacom Inc.’s Comedy Central, seeking different venues from which to discuss homeland- security issues.

Successes against al-Qaeda have helped keep the main organization holed up in the tribal region of northwestern Pakistan, she said.

“Constant pressure on al-Qaeda through a variety of means, some of which have been through the Department of Defense, has really confined them geographically,” she said.

Al-Qaeda leaders have been caught or killed, and the group’s financing has been traced and blocked, Napolitano said. The leaders are adapting to the U.S. efforts by using affiliated groups in northern Africa and other regions to help plan attacks, she said.

“This is not a static target or a static threat environment,” she said. “We can’t simply say we can check this box and we can move on.”

In the U.S., the government has put money into gathering intelligence about the movements of terrorist suspects, Napolitano said. “The key thing is intelligence analysts,” she said.

This effort is more of a priority than developing a system that could keep track of visitors, she said. The government can’t track the more than 200,000 people who intentionally have overstayed their visas, the New York Times said today.

“Such a system would be very, very expensive and laborious to have, given the kinds of border we have,” she said. Scientists and engineers aren’t “even sure they have the technology to make it work.”

In addition to improving intelligence, the U.S. is getting more control over its borders by adding Border Patrol agents and increasing enforcement, particularly in the Southwest, said Napolitano, who was governor of Arizona until President Barack Obama picked her for his Cabinet.

The stepped-up monitoring and rounding up of illegal border-crossers is quelling opposition to immigration legislation, she said.

“One of the things that has changed is that there has been a lot of enforcement at the Southwest border,” she said. “It’s just not the same border.”

Republican lawmakers in 2007 helped defeat a comprehensive immigration measure pushed by former President George W. Bush’s administration over concerns about lack of enforcement. The Bush-backed measure included a program that allowed foreigners to temporarily work in the U.S.

Napolitano declined to say when Congress would begin debate on another immigration measure. The Homeland Security department is working with Senator Charles Schumer, a New York Democrat, on the legislation, she said.

The secretary said she’s also focusing on increasing communication between the federal government and the private sector on boosting security of computer networks.

Leaders in financial security discussed with her today ways to protect the financial system from cyber-terrorism or other attacks, Napolitano said.

“The financial institutions of this country are part of our bedrock infrastructure,” she said. “They need to be protected. We need to be able to protect them.”

They discussed companies’ needs, barriers they are confronting and international threats, she said. Napolitano declined to name the people she met with, saying she didn’t have a list.

The U.S. is concerned about the use of computer systems to commit fraud or interfere with infrastructure, she said.

She said financial leaders want to receive “actionable intelligence.” Larger banks and brokerages have “a pretty robust information-sharing system amongst them” about cyber- security, she said.

“We want to make sure that medium-, small-size local financial institutions are properly looped in and that they have a point of contact in the Department of Homeland Security either to report intrusions or prevent intrusions,” she said.

On another issue, Napolitano said she expected many U.S. residents to be vaccinated against the swine flu, also known as H1N1, once the vaccine becomes widely available.

The first doses of swine flu vaccine were given to health- care workers and children last week, and about 6.8 million doses are available to be shipped. This influenza strain and the seasonal flu require separate shots, which can be taken at the same time. The Atlanta-based Centers for Disease Control and Prevention said the swine flu is widespread in 37 states.

The H1NI vaccine “is a very safe vaccine,” Napolitano said. “We can prevent a lot of illness and perhaps death, the more people we can vaccinate.”

The secretary said she’s concerned about polls that show many Americans won’t be getting a swine flu shot.

“This is something where getting the vaccine is so much the better” than not, she said. “We need to keep pumping out that information.”

Swine flu has killed about 4,500 people worldwide, including more than 600 in the U.S., the World Health Organization reported last week.