FBI delves into DMV photos in search for fugitives 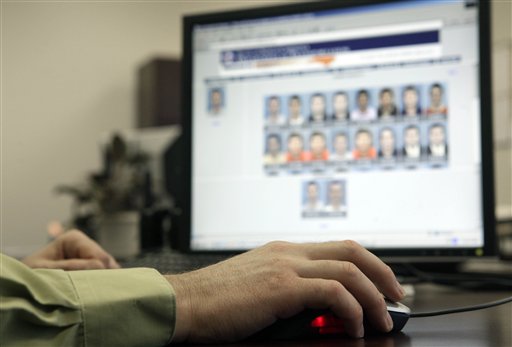 Stephen Lamm, supervisor with the ID Fraud Unit of the North Carolina Department of Motor Vehicles looks through photos in the facial recognition system

RALEIGH, N.C. — In its search for fugitives, the FBI has begun using facial-recognition technology on millions of motorists, comparing driver’s license photos with pictures of convicts in a high-tech analysis of chin widths and nose sizes.

The project in North Carolina has already helped nab at least one suspect. Agents are eager to look for more criminals and possibly to expand the effort nationwide. But privacy advocates worry that the method allows authorities to track people who have done nothing wrong.

“Everybody’s participating, essentially, in a virtual lineup by getting a driver’s license,” said Christopher Calabrese, an attorney who focuses on privacy issues at the American Civil Liberties Union.

Earlier this year, investigators learned that a double-homicide suspect named Rodolfo Corrales had moved to North Carolina. The FBI took a 1991 booking photo from California and compared it with 30 million photos stored by the motor vehicle agency in Raleigh.

In seconds, the search returned dozens of drivers who resembled Corrales, and an FBI analyst reviewed a gallery of images before zeroing in on a man who called himself Jose Solis.

A week later, after corroborating Corrales’ identity, agents arrested him in High Point, southwest of Greensboro, where they believe he had built a new life under the assumed name. Corrales is scheduled for a preliminary hearing in Los Angeles later this month.

“Running facial recognition is not very labor-intensive at all,” analyst Michael Garcia said. “If I can probe a hundred fugitives and get one or two, that’s a home run.”

Facial-recognition software is not entirely new, but the North Carolina project is the first major step for the FBI as it considers expanding use of the technology to find fugitives nationwide.

So-called biometric information that is unique to each person also includes fingerprints and DNA. More distant possibilities include iris patterns in the eye, voices, scent and even a person’s gait.

FBI officials have organized a panel of authorities to study how best to increase use of the software. It will take at least a year to establish standards for license photos, and there’s no timetable to roll out the program nationally.

Calabrese said Americans should be concerned about how their driver’s licenses are being used.

Licenses “started as a permission to drive,” he said. “Now you need them to open a bank account. You need them to be identified everywhere. And suddenly they’re becoming the de facto law enforcement database.”

State and federal laws allow driver’s license agencies to release records for law enforcement, and local agencies have access to North Carolina’s database, too. But the FBI is not authorized to collect and store the photos. That means the facial-recognition analysis must be done at the North Carolina Division of Motor Vehicles.

“Unless the person’s a criminal, we would not have a need to have that information in the system,” said Kim Del Greco, who oversees the FBI’s biometrics division. “I think that would be a privacy concern. We’re staying away from that.”

Dan Roberts, assistant director of the FBI’s Criminal Justice Information Services Division, added: “We’re not interested in housing a bunch of photos of people who have done absolutely nothing wrong.”

Gone are the days when states made drivers’ licenses by snapping Polaroid photos and laminating them onto cards without recording copies.

Now states have quality photo machines and rules that prohibit drivers from smiling during the snapshot to improve the accuracy of computer comparisons.

North Carolina’s lab scans an image and, within 10 seconds, compares the likeness with other photos based on an algorithm of factors such as the width of a chin or the structure of cheekbones. The search returns several hundred photos ranked by the similarities.

“We’ll get some close hits, and we’ll get some hits that are right on,” said Stephen Lamm, who oversees the DMV lab.

The technology allowed the DMV to quickly highlight 28 different photos of one man who was apparently using many identities. It also identified one person who, as part of a sex change, came in with plucked eyebrows, long flowing hair and a new name — but the same radiant smile.

The system is not always right. Investigators used one DMV photo of an Associated Press reporter to search for a second DMV photo, but the system first returned dozens of other people, including a North Carolina terrorism suspect who had some similar facial features.

The images from the reporter and terror suspect scored a likeness of 72 percent, below the mid-80s that officials consider a solid hit.

Facial-recognition experts believe the technology has improved drastically since 2002, when extremely high failure rates led authorities to scrap a program planned for the entrances to the Winter Olympics in Salt Lake City.

Lamm said investigators reviewing the galleries can almost always find the right photo, using a combination of the computer and the naked eye.

Marc Rotenberg, executive director of the Electronic Privacy Information Center, questioned whether the facial-recognition systems that were pushed after the Sept. 11 attacks are accurate or even worthwhile.

“We don’t have good photos of terrorists,” Rotenberg said. “Most of the facial-recognition systems today are built on state DMV records because that’s where the good photos are. It’s not where the terrorists are.”