“War is Peace; Freedom is Slavery; Ignorance is Strength.”

Obama  should have shared the Nobel Peace Prize with George W. Bush, because he is just continuing his policies. And right now it looks like Obama will be even a lot worse than Bush. 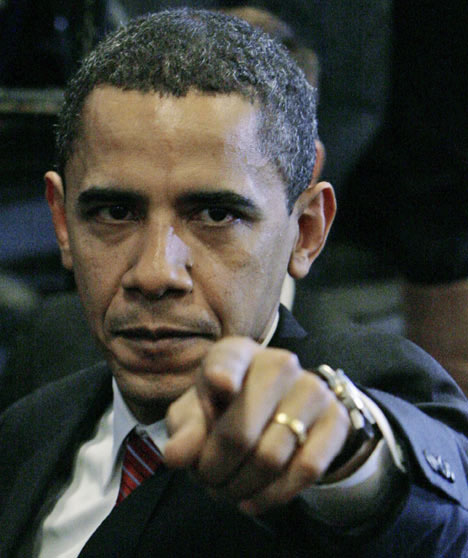 Less than nine months into his presidency, Barack Obama has been awarded the 2009 Nobel Peace Prize.

The Norwegian Nobel Committee said it honored Obama for his “extraordinary efforts to strengthen international diplomacy and cooperation between peoples.”

The president had not been mentioned as among front-runners for the prize, and the roomful of reporters gasped when Thorbjorn Jagland, chairman of the Nobel committee, uttered Obama’s name.

The president, who was awakened to be told he had won, said he was humbled to be selected, according to an administration official.

The Nobel committee recognized Obama’s efforts to solve complex global problems including working toward a world free of nuclear weapons.

“Only very rarely has a person to the same extent as Obama captured the world’s attention and given its people hope for a better future,” the committee said.

Jagland said the decision was “unanimous” and came with ease.

He rejected the notion that Obama had been recognized prematurely for his efforts and said the committee wanted to promote the president just it had Mikhail Gorbachev in 1990 in his efforts to open up the Soviet Union.

“His diplomacy is founded in the concept that those who are to lead the world must do so on the basis of values and attitudes that are shared by the majority of the world’s population,” it said.

Obama’s recognition comes less than a year after he became the first African-American to win the White House. He is the fourth U.S. president to win the prestigious prize and the third sitting president to do so.

The announcement Friday in Oslo, Norway, came as a surprise — Obama had not been mentioned among front-runners — and the roomful of reporters gasped when Thorbjorn Jagland, chairman of the Nobel committee, announced Obama’s name.

Jagland said the decision was unanimous and came with ease.

He rejected the notion that Obama had been recognized prematurely for his efforts and said the committee wanted to promote the president just it had Mikhail Gorbachev in 1990 in his efforts to open up the Soviet Union.

Jagland said he hoped the prize would help Obama resolve the conflicts in Iraq and Afghanistan.

Listen to Jagland explain why Obama was this year’s choice »

Former Finnish President Martti Ahtisaari, last year’s laureate, said it was clear the Nobel committee wanted to encourage Obama on the issues he has been discussing on the world stage.

“I see this as an important encouragement,” Ahtisaari said.

The committee wanted to be “far more daring” than in recent times and make an impact on global politics, said Kristian Berg Harpviken, director of the International Peace Research Institute.

And Wangari Muta Maathai, the Kenyan environmentalist who won the 2004 Peace Prize, said the win for Obama, whose father was Kenyan, would help Africa move forward.

“I think it is extraordinary,” she said. “It will be even greater inspiration for the world. He has shown how we can probably come together, work together in a cooperative way.”

The award comes at a crucial time for Obama, who has initiated peace missions to key parts of the globe.

Obama’s envoy to the Middle East, George Mitchell, has returned to the region to advocate for peace negotiations between Israelis and Palestinians. Mitchell met Thursday with Israeli President Shimon Peres. He plans to meet Friday with Prime Minister Benjamin Netanyahu before talking with Palestinian leaders in the West Bank.

Secretary of State Hillary Clinton starts a six-day trip to Europe and Russia on Friday. On the trip, the secretary will discuss the next steps on Iran and North Korea, and international efforts to have the two countries end their nuclear programs.

The centerpiece of the trip will be her visit to Moscow, where she will work toward an agreement to take the place of the Start II arms control pact, which expires December 5. She also will address the new bilateral presidential commission that is working on a broad range of issues, from arms control to health.

“I could not think of anybody who is more deserving,” said ElBaradei, the chief of the International Atomic Energy Agency.

Listen to ElBaradei react to the announcement »

As the news of Obama’s win broke online, postings on social network sites Twitter and Facebook expressed surprise. Many started with the word: Wow.

The last sitting U.S. president to win the peace prize was Woodrow Wilson in 1919. The other was Theodore Roosevelt in 1906. Jimmy Carter had been out of office for more than two decades when he won in 2002.

This year’s Peace Prize nominees included 172 people — among them three Chinese dissidents, an Afghan activist and a controversial Colombian lawmaker — and 33 organizations, the highest number of nominations ever.

The deadline for nominations must be postmarked by February 1 each year. Obama was inaugurated on January 20.

The Nobel recipient receives a prize of about $1.4 million.