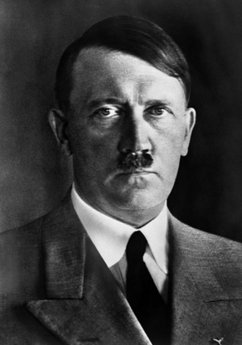 An undated portrait of Adolf Hitler (1889-1945). A skull fragment thought to come from Adolf Hitler is in fact that of an unidentified woman, according to a US study that has resurrected questions about the Nazi leader’s death.
(AFP/File)

HARTFORD, Conn. (AP) – A piece of skull with a bullet hole through it that Russian officials claimed belonged to Adolf Hitler actually came from a woman, scientists at the University of Connecticut concluded.

The cranium fragment is part of a collection of Hitler artifacts preserved by Soviet intelligence in the months after Hitler and Eva Braun reportedly committed suicide in a Berlin bunker in April 1945.

The collection, now housed in the Russian State Archive in Moscow, also includes bloodstained pieces of the sofa where Hitler reportedly shot himself after taking a cyanide pill. The artifacts were put on public display in 2000.

Connecticut archaeologist Nick Bellantoni was asked to examine the skull and blood samples for a History Channel documentary on Hitler’s death that aired this month.

Bellantoni said his initial forensic exam of the skull fragment showed it didn’t match what he knew of Hitler’s biology.

“The bone was very small and thin, and normally male bones are much more robust in our species,” Bellantoni said Tuesday. “I thought it probably came from a woman or a younger man.”

Bellantoni then took several pinhead-size pieces of the skull fragment and swabs of the blood stains back to the university for analysis.

Linda Strausbaugh, a professor of molecular and cell biology, got help from two former students who work in the New York City medical examiner’s office. The former students, Craig O’Connor and Heather Nelson, are experts in working with challenging DNA samples and were able to extract enough DNA from the bone pieces to do a forensic study, Strausbaugh said.

She said they determined that the DNA came from a 20- to 40-year-old woman. The skull fragment could have come from Braun, but to know that, the lab would need samples of her DNA, she said. Also, the DNA samples were very degraded, making identification unlikely, Strausbaugh said.

Witnesses never reported Braun being shot in the head, Bellantoni said, and she is thought to have died of cyanide poisoning.

“This person, with a bullet hole coming out the back of the head, would have been shot in the face, in the mouth or underneath chin,” he said. “It would have been hard for them to miss that.”

DNA from the bloodstain swabs showed at least some of it came from a man, Strausbaugh said.

“The DNA is relatively degraded and we don’t have a full range of markers that we’d like to have,” she said.

Russian officials have said Hitler and Braun’s bodies were removed from a shell crater outside the bunker shortly after he died.

An autopsy allegedly showed Hitler’s body was missing part of his cranium. A Soviet team went back to the crater in 1946 and allegedly found the piece of cranium that the UConn scientists examined.

Russian officials have said the rest of Hitler was buried beneath a Soviet army parade ground in the former East German city of Magdeburg. They said his remains were exhumed in 1970 and incinerated, and the ashes were flushed into the city’s sewage system.

Both Strausbaugh and Bellantoni said there is nothing in their findings that significantly challenges the conclusion that Hitler died in the bunker.

“My gut feeling is he did commit suicide there, and maybe the blood sample we found is his,” Bellantoni said.

“What this does is it raises a question: If this is not him who is it?” he later added. “And, two, what really happened there?”