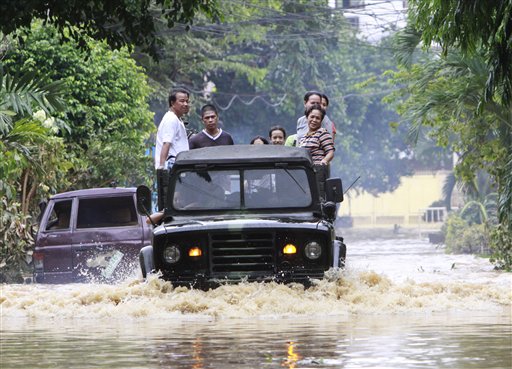 He told a news conference that help from foreign governments will ensure that the Philippine government can continue its relief work.

“We are trying our level best to provide basic necessities, but the potential for a more serious situation is there,” Teodoro told a news conference. “We cannot wait for that to happen.”

Since the storm struck, the government has declared a “state of calamity” in metropolitan Manila and 25 storm-hit provinces, allowing officials to use emergency funds for relief and rescue.

The homes of nearly half a million people were inundated. Some 115,000 of them were brought to about 200 schools, churches and other evacuation shelters, officials said.

Resident Jeff Aquino said floodwaters rose to his home’s third floor at the height of the storm.

Aquino, his wife, three young children and two nephews spent that night on their roof without food and water, mixing infant formula for his 2-year-old twins with the falling rain.

“We thought it was the end for us,” Aquino said.

Among those stranded by the floodwaters was young actress Christine Reyes, who was rescued by movie and TV heartthrob Richard Gutierrez from the rooftop of her home near Manila after she made a frantic call for help to a local TV network with her mobile phone.

“If the rains do not stop, the water will reach the roof. We do not know what to do. My mother doesn’t know how to swim,” she said, weeping.

Gutierrez, a close friend and Reyes’ co-star in an upcoming movie, heard of her plight, borrowed an army speedboat and ferried Reyes, her mother and two young children to safety.

“I thought it was our ending but I did not lose hope,” Reyes said, thanking Gutierrez. “Let us help those who have not yet been rescued.”

President Gloria Macapagal Arroyo has said Ketsana and the flooding were “an extreme event” that “strained our response capabilities to the limit but ultimately did not break us.”

The United States has donated $100,000 and deployed a military helicopter and five rubber boats manned by about 20 American soldiers from the country’s south, where they have been providing counterterrorism training. The United Nations Children’s Fund and the World Food Program have also provided food and other aid.

Activists, meanwhile, pointed to the deadly flooding as an example of the dangers of global warming at U.N. climate negotiations in Bangkok.

“The Philippine floods should remind politicians and delegates negotiating the climate treaty that they are not just talking about paragraphs, amendments and dollars but about the lives of millions of people and the future of this planet,” said Kim Carstensen, Leader of the WWF Global Climate Initiative.