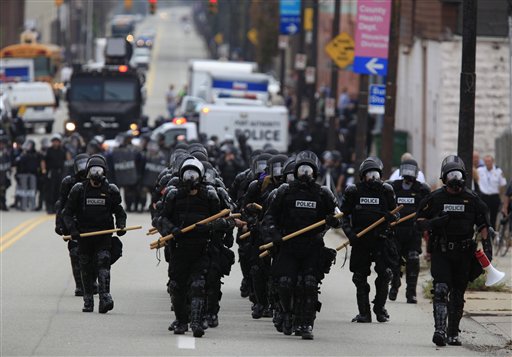 Pittsburgh police in riot gear redeploy after confrontations with protestors near the Strip District in Pittsburgh, Thursday Sept. 24, 2009. Hundreds of demonstrators marched in protest of the G20, which is expected to begin in Pittsburgh on Thursday. (AP Photo/Jacqueline Larma)

PITTSBURGH — Police fired canisters of pepper spray and smoke at marchers protesting the Group of 20 summit Thursday after anarchists responded to calls to disperse by rolling trash bins and throwing rocks.

The afternoon march turned chaotic at just about the time that President Barack Obama and first lady Michelle Obama arrived for a meeting with leaders of the world’s major economies.

The clashes began after hundreds of protesters, many advocating against capitalism, tried to march from an outlying neighborhood toward the convention center where the summit is being held.

One banner read, “No borders, no banks,” another, “No hope in capitalism.” A few minutes into the march, protesters unfurled a large banner reading “NO BAILOUT NO CAPITALISM” with an encircled “A,” a recognized sign of anarchists.

The marchers did not have a permit and, after a few blocks, police declared it an unlawful assembly. They played an announcement over a loudspeaker ordering people to leave and then police in riot gear moved in to break it up. Authorities also used a crowd-control device that emits a deafening siren-like noise, making it uncomfortable for protesters to remain in the area.

Protesters split into smaller groups. Some rolled large metal trash bins toward police, and a man in a black hooded sweat shirt threw rocks at a police car, breaking the front windshield. Protesters broke windows in a few businesses, including a bank branch, a Boston Market restaurant and a BMW dealership.

Officers fired pepper spray and smoke at the protesters and set off a flash-bang grenade. Some of those exposed to the pepper spray coughed and complained that their eyes were watering and stinging.

Police were planning a news conference to discuss their response. Officers were seen taking away a handful of protesters in cuffs.

About an hour after the clashes started, the police and protesters were at a standoff. Police sealed off main thoroughfares to downtown.

Twenty-one-year-old Stephon Boatwright, of Syracuse, N.Y., wore a mask of English anarchist Guy Fawkes and yelled at a line of riot police. He then sat cross-legged near the officers, telling them to let the protesters through and to join their cause.

“You’re actively suppressing us. I know you want to move,” Boatwright yelled, to applause from the protesters gathered around him.

Protesters complained that the march had been peaceful and that police were trampling on their right to assemble.

“We were barely even protesting,” said T.J. Amick, 22, of Pittsburgh. “Then all of a sudden, they come up and tell us we’re gathered illegally and start using force, start banging their shields, start telling us we’re going to be arrested and tear gassed. … We haven’t broken any laws.”

Bret Hatch, 26, of Green Bay, Wis., was carrying an American flag and a “Don’t Tread on Me” flag.

“This is ridiculous. We have constitutional rights to free speech,” he said.

The National Lawyer’s Guild, a liberal legal-aid group, said one of its observers, a second year law student, was among those arrested. Its representatives were stationed among the protesters, wearing green hats.

“I think he was totally acting according to the law. I don’t think he was provoking anyone at all,” said Joel Kupferman, a member of the guild. “It’s really upsetting because he’s here to serve, to make sure everyone else can be protected. … It’s a sign that they are out of control.”

The march had begun at a city park, where an activist from New York City, dressed in a white suit with a preacher’s collar, started it off with a speech through a bullhorn.

“They are not operating on Earth time. … They are accommodating the devil,” he said. “To love democracy and to love the earth is to be a radical now.”

The activist, Billy Talen, travels the country preaching against consumerism. He initially identified himself as “the Rev. Billy from the Church of Life After Shopping.”

Later Thursday, hundreds of protesters, including a handful of anarchists, massed near the Phipps Conservatory and Botanical Garden where the G-20 summit was beginning with a welcome ceremony.

Dignitaries arrived in waves throughout the day, entering a city under heavy security. Police and National Guard troops guarded many downtown intersections, and a maze of tall metal fences and concrete barriers shunted cars and pedestrians.

The G-20 ends late Friday afternoon after a day of meetings at the David L. Lawrence Convention Center.

Trouble has flared as world leaders gather in the US city of Pittsburgh for the G20 summit.

Police fired canisters of pepper spray and smoke at marchers after they caused trouble by rolling rubbish bins and throwing rocks.

The clashes began after hundreds of protesters, many shouting anti-capitalist slogans, tried to march from the outlying Lawrenceville neighbourhood toward the convention centre where the summit is being held.

The protesters banged on drums and chanted as they marched through the streets.