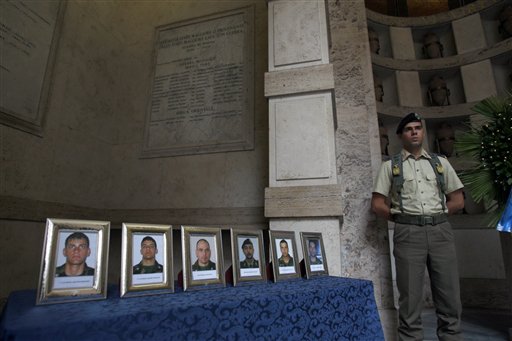 A view of a sacrary displaying the six photos, of the fallen soldiers from the Italian Army, who died in an attack on an Italian military convoy in Kabul which also killed 10 Afghan civilians, seen in Rome, Thursday, Sept. 17, 2009.

ROME — Premier Silvio Berlusconi said Thursday it would be best for international troops to leave Afghanistan soon, after a bomb blast in Kabul killed six Italian soldiers in Italy’s deadliest day yet in the conflict.

Berlusconi insisted there was no timetable for withdrawal, and said any decision would be made together with Italy’s allies. The explosion also wounded four Italian soldiers.

“We are all convinced it’s best for everybody to get out soon,” Berlusconi told reporters in Brussels. His comments were carried on Italian state TV.

But he said Italy is “dealing with an international question that you can’t decide on your own because that would betray an accord.”

Comments from the conservative premier and some of his allies in government appeared to show some political confusion over what effect the attack will have on Italy’s staunch commitment to helping the United States militarily in Afghanistan.

Italy’s defense minister, Ignazio La Russa, said early in the day that the “cowardly” attack in the Afghan capital would not affect Italy’s commitment. But later Thursday he indicated the role of Italy’s mission would be reviewed.

And a key coalition partner in Berlusconi’s government said he hoped Italy’s troops could leave within three months.

“I hope that at Christmas all can return home,” Reforms Minister Umberto Bossi told reporters in northern Italy.

Italy has about 2,800 soldiers in Afghanistan. Thursday’s victims, part of a contingent deployed in Kabul, bring to 20 the number of Italian troops who have died in Afghanistan, according to the Defense Ministry.

The White House has been counting on allies to stand standing firm to their troop commitments to Afghanistan.

Initially, La Russa, the defense minister, restated Italy’s firm commitment to staying the course. But his position appeared to become more nuanced as the day wore on.

“This is the moment for condolences and for unity,” he told lawmakers in the Chamber of Deputies. “Later we’ll have the time and space to study the significance of the mission and discuss how to be closer to our soldiers.”

He said Italy would continue to assess the mission with its international allies.

Shortly after the attack, La Russa said in the Senate that a suicide bomber rammed a car packed with explosives into two military vehicles. He said the lives of the four injured soldiers did not appear to be in immediate danger.

In an early evening briefing to the lower chamber of Parliament, La Russa said the 150 kilograms (330 pounds) of explosives might have been set off at a distance, without a suicide bomber in the car.

He appeared to be raising the possibility the blast was triggered by a remote device, but didn’t elaborate.

Pope Benedict XVI was praying for the victims and expressed his closeness to their relatives, said Vatican spokesman the Rev. Federico Lombardi.

The U.S. ambassador to Italy expressed his “deepest sympathy” on behalf of President Barack Obama. “Together, we are dedicated to helping the Afghan people as they struggle for freedom, and above all for safety from the barbaric terrorism that we witnessed once again today,” Ambassador David H. Thorne said in a statement.

Violence in Afghanistan has soared to record levels — and skepticism over the war has grown with it. More U.S. troops — 51 — died in Afghanistan in August than in any other month since the U.S.-led invasion in October 2001.

“It is precisely in these moments of difficulty that we must remain close to the Afghans and not forget that our presence there serves both their and our security,” said Frattini.

The attack caused the highest death toll suffered by Italian forces since a bombing in Iraq killed 19 personnel in November 2003.