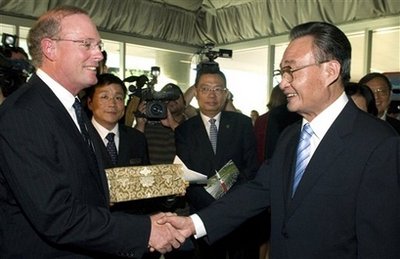 Under a memorandum of understanding with the Chinese government, First Solar will build a 2-gigawatt power plant, enough to power about 3 million Chinese households, at Ordos City, in Inner Mongolia, and consider building a new manufacturing plant in China.

The announcement comes as the solar industry struggles to emerge from a year-long slump that saw financing for new projects dry up and reduced subsidies in Spain create a glut of unsold cells and panels.

The project is part of China’s program to generate 10 percent of its energy from renewable resources by 2010 and 15 percent by 2020 to help meet its growing energy appetite that has made the country the world’s top emitter of carbon dioxide.

First Solar will begin constructing a 30 megawatt demonstration project in June 2010 in Ordos. The second and third phases call for 100 megawatt and 870 megawatt projects that will be completed in 2014. A final 1,000 megawatt installation will be finished in 2019.

Solar projects have so far been built on a smaller scale, and the First Solar project will be a test of whether the technology behind the plant — which will be 30 times the size of the largest current plant — can be scaled up.

“In most people’s heads, (solar) is a nice little niche thing,” First Solar Chairman and Chief Executive Michael Ahearn told Reuters. “Having a demonstration of something that’s nuclear plant size will begin to change that image.”

Such a project would cost about $6 billion to build in the U.S. Southwest, but First Solar expects lower costs in China.

The agreement hinges on signing contracts with a power generator to operate the project in China, as well as Beijing’s approval of a feed-in tariff mandating utilities pay a premium for solar power, similar to supports in place in Germany.

That tariff is expected to be enacted by the end of the year, with a support likely in the range of 15 to 25 cents per kilowatt hour, Ahearn said.

“If they set the feed-in tariff in China to enable any kind of solar market for any group of manufacturers, it will work for us because we have the lowest cost,” Ahearn said.

The announcement sent First Solar shares up more than 10 percent before they slightly pared gains to trade up nearly 8 percent at $130.62.

First Solar is the world’s lowest-cost producer of photovoltaic modules, which turn sunlight into electricity, with a manufacturing cost for its cadmium telluride-based modules of about 87 cents per kilowatt.

The Tempe, Arizona-based company has long been a favorite of alternative energy investors, and is about 40 percent owned by heirs to John Walton, founder of Wal-Mart.

The announcement could also quell complaints that Beijing’s support for its solar manufacturers was giving companies such as Suntech Power Holdings, Trina Solar and Yingli Green Energy an unfair trade advantage over European and U.S. companies vying for market share in the global sector.

“It kind of debunks some of the thinking that non-Chinese companies could never participate in the market, regardless of how the law might read nominally,” Ahearn said.

On Monday, Ahearn and Chairman Wu Bangguo of the Standing Committee of the National People’s Congress of China toured the company’s headquarters in Tempe.

“I think if you have something compelling relative to the Chinese suppliers there’s room in the market. And if you don’t, I don’t think they’re going to bend to open a door for non-Chinese companies,” Ahearn said.

The scale of the project would present numerous technical hurdles, but it could offer the chance to reduce costs, especially for installation, which now run about $1.50 per watt.

“If we can take that to $1 or below then you’ve got something pretty interesting. That’s solar power at 10 cents a kilowatt hour or less,” he said.