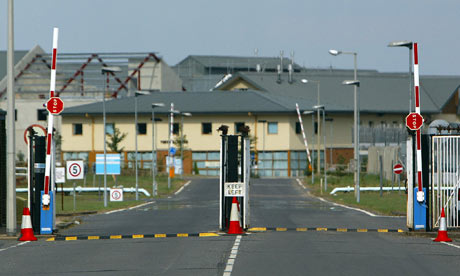 Ministers were facing accusations today that hundreds of children are being held unnecessarily in immigration detention centres as official figures revealed, for the first time, that 470 minors were being detained with their families.

The figures, made public following pressure from children’s rights groups and MPs, showed most were under five.

Many were from troubled countries such as Zimbabwe, Sudan, Sri Lanka and Democratic Republic of Congo.

The UK has one of the worst records in Europe for detaining children, but accurate figures on how many are held, or for how long, have remained elusive.

While the Home Office has not divulged the length of detention, it provided a “snapshot” picture of those held on a single day: 30 June 2009.

This shows that almost a third of children were held for longer than 28 days, which means that in each case an immigration minister had to sign an authorisation for their continued detention.

The figures also show that out of 225 children released from detention in the second quarter this year, only 100 were removed from the UK.

Yesterday, MPs and children’s rights groups called for an end to the “national scandal” that has allowed children to be locked up unnecessarily.

Sir Al Aynsley-Green, the children’s commissioner for England, welcomed the publication of the figures, but said they raised important questions.

He said: “If they were allowed to stay at the end of their release, why did they have to go through the detention process in the first place?”

He described the fact that one in three had been held for longer than 28 days as “extremely worrying”.

Earlier this year, Aynsley-Green published a critical report into Yarl’s Wood detention centre in Bedfordshire which found the average stay for children had increased, and the decision to detain for longer than 28 days failed to take into account any welfare concerns raised.

Damian Green, shadow immigration minister, described the government’s attempts to find alternatives to detention for families as “feeble”, adding: “It would be better and cheaper if we don’t have to lock up young children for weeks and sometimes months. Other countries seem to do better than we do at finding alternatives.”

The average cost of holding someone in an immigration detention centre is £130 per day.

The Guardian has spoken to three families held at Yarl’s Wood for between 19 and 71 days. One of the children has been diagnosed as suffering from post-traumatic stress disorder, while another, Ibrahim Ssentongo, four, remains traumatised seven months after his detention.

Ibrahim’s father, Stephen Ssentongo, 35, from Uganda, said: “When he sees people in uniforms of white shirts and black trousers, like bus drivers or security guards in shopping centres, he stops. He wants to hold your hand or to stand in front of you, so that you will hold him. He is scared.”

Sheila Melzak, a consultant child psychotherapist who has worked with families in detention, said Ibrahim’s trauma was far from unusual.

“All the young people I have been talking to have lingering effects, after months and even after years” she said.

“It is frightening for children to see their parents in tears. They see adults in a high state of stress, they hear a lot of shouting and crying. It is a highly institutionalised environment and that leads to problems with eating and sleeping and learning.”

Bethlehem Abate, 12, from Ethiopia, described the day she and her mother were seized in an early morning raid as “one of the worst days I ever had to experience”.

The schoolgirl, who has been living in Leeds for four years after fleeing her home country to seek asylum, said she was disillusioned by the British government, because she felt sure “they would understand our situation and help us”, but instead they have “turned everything around.”

Family and children’s support groups said the statistics showed the UK Borders Agency was failing in its duty to detain children only “as a measure of last resort and for the shortest appropriate period of time”.

Amanda Shah, of Bail for Immigration Detainees, said: “Fifty-six per cent of detained children were released back to their communities in the UK, their detention having served no purpose other than wasting taxpayers’ money and traumatising the children involved. Children we have supported have suffered depression, weight loss, bedwetting and even self-harm as a result of their detention – that is the human reality behind the statistics.”

Lisa Nandy, policy adviser at the Children’s Society, said children were being detained unnecessarily because the asylum system was “chaotic” and because the UK Border Agency and private contractors who work for them often targeted families to increase their removal rates.

The Home Office said today : “UK Border Agency fully recognises its responsibilities towards children but these responsibilities have to be exercised alongside our duty to enforce the laws on immigration and asylum. If a family decide to appeal against the courts decision while being detained the removal process is halted. If a judge agrees that there are fresh grounds for an appeal the family are usually returned back to the community until the case has been reviewed.”