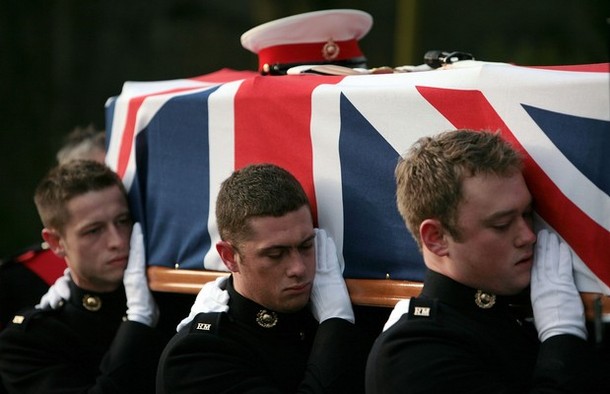 206 British soldiers died in Afghanistan since the invasion

The public’s growing opposition to the conflict comes after the number of British deaths in Afghanistan rose above 200 earlier this month.

Yesterday, Gen Sir David Richards took over as Chief of the General Staff and vowed to get better equipment for troops and improved care for those injured fighting for Britain.

A Daily Telegraph/YouGov poll showed 62 per cent of people opposed British troops staying in Afghanistan, while 26 per cent were in favour.

Previous polls had shown that most people backed the conflict in Afghanistan, unlike the war in Iraq. They accepted the argument espoused by ministers and the opposition that it was part of the fight against terrorism that could be exported to British streets.

But increasingly voters appear unwilling to accept that claim.

Gordon Brown and Bob Ainsworth, the Defence Secretary, have been criticised for not properly equipping British troops who were part of Operation Panther’s Claw, the fierce summer offensive against the Taliban in the run up to presidential elections. Both men have defended the Ministry of Defence and argued that service chiefs do have the equipment they need.

In his first remarks since taking over from Gen Sir Richard Dannatt, Gen Richards said a swell as fighting abroad he would battle for a better deal for his troops at home so they had the right equipment. Gen Dannatt had recently become more outspoken about the issue and incurred the wrath of ministers.

Gen Richards said: “The Army’s most valuable assets are its people: it is essential that we continue to look after our soldiers and their families, especially those injured or affected adversely through conflict.”

The Daily Telegraph is running a campaign, Justice for Wounded, to secure better care for those injured fighting for Britain.

It came as Brig Tim Radford, head of British forces in Afghanistan, said he would welcome more air support in the battle with the Taliban.

He said: “I had enough helicopters to do what I wanted on Operation Panther’s Claw … but ask any commander and they will tell you they would like more.

“More helicopters would certainly make us more tactically effective but I am realistic about the timelines required to deliver them to theatre.”

Brig Radford was asked whether he endorsed the call by Sir Richard Dannatt, the former head of the Army, for more unmanned drones, which can spot where the Taliban have laid bombs.

He said: “Anything that is going to provide situational awareness for my soldiers is of benefit.”

The Conservatives have attacked Mr Brown for his record on procurement for operations in Afghanistan, but David Cameron remains committed to the aims of the conflict in the region.

Only Nick Clegg, the Liberal Democrat leader, has expressed doubts. He warned in an article for the Daily Telegraph last month that Britain would have to reconsider its position if the will to properly supply troops continued to be missing.

The public reaction at the release of the Lockerbie bomber is also cause for concern for the Prime Minister. The Telegraph/YouGov poll found 67 per cent of people were against setting Abdelbaset Ali Mohamed al Megrahi free on compassionate grounds. Only 24 per cent said it was right to release a man who killed 270 people.

He was released last week, a move which led to a storm of protest from opposition parties, Lockerbie victims’ families and Barack Obama.

Mr Brown has refused to say whether he agreed with the decision to let Megrahi return to Libya on compassionate grounds amid claims that the Government was happy to see him released as part of on-going attempts to secure trade deals with Colonel Gaddafi.