– Brace for a New Wave of Foreclosures, the Dam is About to Break 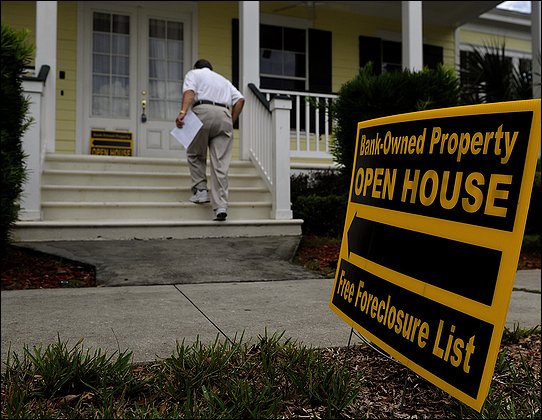 In the first quarter, most foreclosures came from prime, not subprime, loans as more unemployed people got caught in foreclosures, economists say.

The country’s growing unemployment is overtaking subprime mortgages as the main driver of foreclosures, according to bankers and economists, threatening to send even higher the number of borrowers who will lose their homes and making the foreclosure crisis far more complicated to unwind.

Economists estimate that 1.8 million borrowers will lose their homes this year, up from 1.4 million last year, according to Moody’s Economy.com. And the government, which has already committed billions of dollars to foreclosure-prevention efforts, has found it far more difficult to help people who have lost their paychecks than those whose mortgage payments became unaffordable because of an interest-rate increase.

“It’s a much harder nut to crack, unemployment,” said Mark A. Calabria, director of financial regulation studies at the Cato Institute. “It’s much easier to bash lenders than to create jobs.”

During the first three months of this year, the largest share of foreclosures shifted from subprime loans to prime loans, according to the Mortgage Bankers Association. The change to prime loans — traditionally considered safer — reflects the growing numbers of unemployed who are being caught up in the foreclosure process, economists say.

Rep. Barney Frank (D-Mass.), chairman of the House Financial Services Committee, has proposed using $2 billion in government rescue funding to provide emergency loans to these borrowers. “We are going to be seeing more foreclosures because of prolonged unemployment,” he said. “These are people who weren’t in trouble and wouldn’t be in trouble if they hadn’t lost their job.”

Unlike the borrowers with subprime mortgages who helped ignite the housing downturn more than two years ago, Deepak Malla, 42, fell behind on his payments when his information technology job was shipped overseas late last year. He does not have a subprime loan, and he made a 20 percent down payment when he bought his five-bedroom house in Ashburn in 2005. The payments were affordable — until he lost his job.

Last year, about 40 percent of borrowers who sought help at NeighborWorks, a large housing counseling group, cited unemployment or a pay cut as a primary reason for their delinquency. Now it is about 65 percent. The number citing a subprime loan fell significantly.

“Rising unemployment, for the sake of this downturn, has magnified things considerably,” said John Snyder, manager of foreclosure programs for NeighborWorks. “It’s less about the payment adjustment.”

When a subprime borrower becomes delinquent because of a hefty payment increase, the fix often involves lowering the interest rate to its original level. Unemployment poses a more difficult challenge, industry officials and consumer advocates said. During extended periods of joblessness, the borrower accrues large late fees that drive up monthly payments. And a new job often comes with lower pay, making it more difficult to catch up.

When Malla landed another job earlier this year, he took a pay cut of more than 25 percent. He launched a six-month campaign to get Wells Fargo to lower his mortgage payments from $3,500 to reflect his new financial reality, but he was rebuffed repeatedly. “I wanted to work out with them based on my current scenario,” Malla said.

He considered refinancing his mortgage, which had a 5.8 percent interest rate, but his home’s value had fallen significantly since the market peak, making that impossible. Instead, the lender recommended that he sell the house in a short sale. That would mean selling for less than he owed and walking away with nothing.

“They didn’t say why — just that [a loan modification] is outside the investor guidelines,” Malla said. “I was very, very frustrated.” (After being contacted by The Washington Post, a Wells Fargo spokesman said Malla does qualify for a loan modification after all.)

Banks and government regulators are studying how to address the shifting nature of the crisis, which has been exacerbated by falling home prices. When the housing crisis began in 2007, the unemployment rate was about 4.6 percent. It hit 9.4 percent last month, and many economists expect it to reach 10 percent by the end of the year.

Hope Now, a government-backed group of mortgage lenders, has established a task force to look at how to best help unemployed borrowers; one strategy involves creating new types of loan modifications. The Obama administration is also studying the issue as it considers how to make its foreclosure prevention program, known as Making Home Affordable, more effective.

Many housing experts say it will take more than the $75 billion the administration has already said will be spent on foreclosure prevention. Several economists at the Federal Reserve Bank of Boston have proposed creating a government lending or grant program for unemployed borrowers, lowering their payments for up to two years while they look for work. Such a program could cost $25 billion annually and help 3 million homeowners, lowering their payments by 50 percent on average, according to the economists’ proposal.

Currently, unemployed borrowers have few options to save their homes. Banks often will allow two or three missed payments, known as forbearance, to give borrowers time to find a job. Others offer to temporarily lower their payments by 50 percent. But both of these options are not permanent and are ill-suited to the current crisis, consumer advocates and industry officials say.

Part of the problem is that it is taking longer for borrowers to find new employment — a three-month suspension of payments often is not enough. The number of unemployed people who have been looking for a job for more than 26 weeks rose more than 500,000 last month. And under the current system, once borrowers resume payments, their monthly balances rise to make up for overdue amounts.

“Who knows what’s going to happen at the end of the [forbearance], even if they can get it?” said Paul S. Willen, senior economist for the Federal Reserve Bank of Boston.

Citigroup established a test program for unemployed workers in March, offering to lower their payments to $500 a month for three months.

But few of the 600 or so borrowers who have qualified for the plan have reported that they were able to find new jobs, and Citigroup is considering lengthening the period, company officials said. The test has shown that borrowers are at their most motivated shortly after losing their job, so the company may also lift a requirement that homeowners miss at least two payments to qualify for assistance. No decision on the changes has been made, company officials said.

The program has reinforced Citigroup’s conclusion that “unemployment is in fact the root cause of many of the delinquencies,” said Sanjiv Das, chief executive of CitiMortgage. The trick, he said, is to give borrowers enough assistance to keep them motivated to find a job quickly so they can resume making full mortgage payments.

Under the federal foreclosure prevention program, unemployment insurance can be counted as income when a borrower applies for a modification. But the borrower must show eligibility for at least nine months of unemployment checks.

Bill Kachur of Jacksonville, Fla., lost his job as an online training instructor for a large government contractor in January and began scrambling to protect his four-bedroom home, purchased in 2000, from foreclosure. He has been able to scrape together enough to keep up his $850 monthly mortgage payments by liquidating his retirement and investment accounts to supplement his unemployment benefits of $1,200 a month.

Kachur estimates that he has enough for only a few more months of payments, but because he is eligible for more unemployment benefits, he is lobbying his lender, Bank of America, for help. A modification under the federal plan would cut his payments nearly in half, he said.

He said his requests have been denied so far.

Bank of America said it could not comment on Kachur’s specific case. The company complies with the federal foreclosure-prevention plan, including considering unemployment benefits when appropriate, spokesman Rick Simon said.

But a workout faces other tests, including whether a loan modification or foreclosure is better for the investor, he said. “It has to meet all the other guidelines as well,” Simon said.