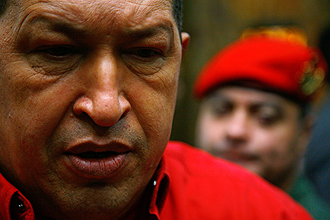 Mr Obama ‘is lost in the clouds. I think he is entering a terrible labyrinth’, Mr Chavez said. ‘Obama doesn’t understand. He needs to study a bit more. He is a young man, full of good intentions.’

His comments come amid growing tension over a plan by Colombia to give US forces access to seven of its military bases to accommodate counter-drug operations following the closure of a base in Ecuador.

Mr Chavez cast the move as a US attempt to encircle Venezuela, warning of a coming military escalation aimed at the country’s oil, access to the Amazon basin and plentiful water sources.

‘An aggression against Venezuela will be met not only by Venezuela; various countries would take up arms,’ he said. ‘It is clear to me that a great anti-imperialistic movement would rise up on these lands, God help us.’

‘But we have to prepare for it. And one of the best ways to avoid it is to show the enemy that it would be so costly for them to attack Venezuela that they would repent,’ he said.

‘We do not want war, we hate it. But we must prepare for it. We are number one on the list, Venezuela. We are the first target of the (United States). Using Colombia and the bases in Aruba and Curacao, they are surrounding us,’ Mr Chavez warned. — AFP