Bernanke has pulled out all the stops.

Credit is not flowing. In fact, credit is contracting. That means things aren’t getting better; they’re getting worse. When credit contracts in a consumer-driven economy, bad things happen. Business investment drops, unemployment soars, earnings plunge, and GDP shrinks. The Fed has spent more than a trillion dollars trying to get consumers to start borrowing again, but without success. The country’s credit engines are grinding to a halt.

Bernanke has increased excess reserves in the banking system by $800 billion, but lending is still slow. The banks are hoarding capital in order to deal with the losses from toxic assets, non performing loans, and a $3.5 trillion commercial real estate bubble that’s following housing into the toilet. That’s why the rate of bank failures is accelerating. 2010 will be even worse; the list is growing. It’s a bloodbath.

The standards for conventional loans have gotten tougher while the pool of qualified credit-worthy borrowers has shrunk. That means less credit flowing into the system. The shadow banking system has been hobbled by the freeze in securitization and only provides a trifling portion of the credit needed to grow the economy. Bernanke’s initiatives haven’t made a bit of difference. Credit continues to shrivel.

The S&P 500 is up 50 percent from its March lows. The financials, retail, materials and industrials are leading the pack. It’s a “Green Shoots” Bear market rally fueled by the Fed’s Quantitative Easing (QE) which is forcing liquidity into the financial system and lifting equities. The same thing happened during the Great Depression. Stocks surged after 1929. Then the prevailing trend took hold and dragged the Dow down 89 percent from its earlier highs. The S&P’s March lows will be tested before the recession is over. Systemwide deleveraging is ongoing. That won’t change.

No one is fooled by the fireworks on Wall Street. Consumer confidence continues to plummet. Everyone knows things are bad. Everyone knows the media is lying. Credit is contracting; the economy’s life’s blood has slowed to a trickle. The economy is headed for a hard landing.

Bernanke has pulled out all the stops. He’s lowered interest rates to zero, backstopped the entire financial system with $13 trillion, propped up insolvent financial institutions and monetized $1 trillion in mortgage-backed securities and US sovereign debt. Nothing has worked. Wages are falling, banks are cutting lines of credit, retirement savings have been slashed in half, and home equity losses continue to mount. Living standards can no longer be bandaged together with VISA or Diners Club cards. Household spending has to fit within one’s salary. That’s why retail, travel, home improvement, luxury items and hotels are all down double-digits. The easy money has dried up.

“Borrowing by U.S. consumers dropped in June for the fifth straight month as the unemployment rate rose, getting loans remained difficult and households put off major purchases. Consumer credit fell $10.3 billion, or 4.92 percent at an annual rate, to $2.5 trillion, according to a Federal Reserve report released today in Washington. Credit dropped by $5.38 billion in May, more than previously estimated. The series of declines is the longest since 1991.

A jobless rate near the highest in 26 years, stagnant wages and falling home values mean consumer spending… will take time to recover even as the recession eases. Incomes fell the most in four years in June as one-time transfer payments from the Obama administration’s stimulus plan dried up, and unemployment is forecast to exceed 10 percent next year before retreating.” (Bloomberg)

What a mess. The Fed has assumed near-dictatorial powers to fight a monster of its own making, and achieved nothing. The real economy is still dead in the water. Bernanke is not getting any traction from his zero-percent interest rates. His monetization program (QE) is just scaring off foreign creditors. On Friday, Marketwatch reported:

“The Federal Reserve will probably allow its $300 billion Treasury-buying program to end over the next six weeks as signs of a housing recovery prompt the central bank to unwind one its most aggressive and unusual interventions into financial markets, big bond dealers say.”

Right. Does anyone believe the housing market is recovering? If so, please check out this chart and keep in mind that, in the first 6 months of 2009, there have already been 1.9 million foreclosures. 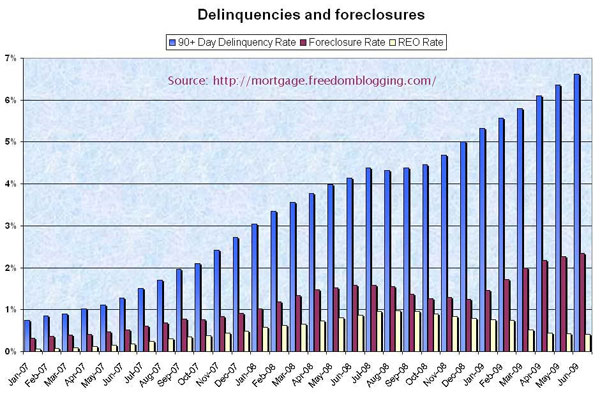 The Fed is abandoning the printing presses (presumably) because China told Geithner to stop printing money or they’d sell their US Treasuries. It’s a wake-up call to Bernanke that the power is shifting from Washington to Beijing.

That puts Bernanke in a pickle. If he stops printing; interest rates will skyrocket, stocks will crash and housing prices will tumble. But if he continues QE, China will dump their Treasuries and the greenback will vanish in a poof of smoke. Either way, the malaise in the credit markets will persist and personal consumption will continue to sputter.

The basic problem is that consumers are buried beneath a mountain of debt and have no choice except to curtail their spending and begin to save. Currently, the the ratio of debt to personal disposable income, is 128% just a tad below its all-time high of 133% in 2007. According to the Federal Reserve Bank of San Francisco’s “Economic Letter: US Household Deleveraging and Future Consumption Growth”:

“The combination of higher debt and lower saving enabled personal consumption expenditures to grow faster than disposable income, providing a significant boost to U.S. economic growth over the period. In the long-run, however, consumption cannot grow faster than income because there is an upper limit to how much debt households can service, based on their incomes. For many U.S. households, current debt levels appear too high, as evidenced by the sharp rise in delinquencies and foreclosures in recent years. To achieve a sustainable level of debt relative to income, households may need to undergo a prolonged period of deleveraging, whereby debt is reduced and saving is increased.

Going forward, it seems probable that many U.S. households will reduce their debt. If accomplished through increased saving, the deleveraging process could result in a substantial and prolonged slowdown in consumer spending relative to pre-recession growth rates.” (“U.S. Household Deleveraging and Future Consumption Growth, by Reuven Glick and Kevin J. Lansing, FRBSF Economic Letter”)

A careful reading of the FRBSF’s Economic Letter shows why the economy will not bounce back. It is mathematically impossible. We’ve reached peak credit; consumers have to deleverage and patch their balance sheets. Household wealth has slipped $14 trillion since the crisis began. Home equity has dropped to 41% (a new low) and joblessness is on the rise. By 2011, Duetsche Bank AG predicts that 48 percent of all homeowners with a mortgage will be underwater. As the equity position of homeowners deteriorates, banks will further tighten credit and foreclosures will mushroom.

The executive board of the IMF does not share Wall Street’s rosy view of the future, which is why it issued a memo that stated:

“Directors observed that the crisis will have important implications for the role of the United States in the global economy. The U.S. consumer is unlikely to play the role of global “buyer of last resort”- other regions will need to play an increased role in supporting global growth.”

The United States will not be the emerge as the center of global demand following the recession. Those days are over. The world is changing and the US role is getting smaller. As US markets become less attractive to foreign exporters, the dollar will lose its position as the world’s reserve currency. As goes the dollar, so goes the empire. Want some advice: Learn Mandarin.

July’s employment numbers came in better than expected (negative 247,000) lowering total unemployment from 9.5% to 9.4%. That’s good. Things are getting worse at a slower pace. What’s striking about the BLS report is that there’s no jobs-surge in any sector of the economy. No signs of life. Outsourcing and offshoring are ongoing, and downsizing is the new path to profitability. Businesses everywhere are anticipating weaker demand. The jobs report is a one-off event; a lull in the storm before the layoffs resume.

Unemployment is rising, wages are falling and credit is contracting. In other words, the system is working exactly as designed. All the money is flowing upwards to the gangsters at the top. Here’s an excerpt from a recent Don Monkerud article that sums it all up:

“During eight years of the Bush Administration, the 400 richest Americans, who now own more than the bottom 150 million Americans, increased their net worth by $700 billion. In 2005, the top one percent claimed 22 percent of the national income, while the top ten percent took half of the total income, the largest share since 1928

… In 1955, IRS records indicated the 400 richest people in the country were worth an average $12.6 million, adjusted for inflation. In 2006, the 400 richest increased their average to $263 million, representing an epochal shift of wealth upward in the U.S.” “Wealth Inequality destroys US Ideals“

Working people are not being crushed by accident, but according to plan. It is the way the system is supposed to work. Bernanke knows that sustained demand requires higher wages and a vital middle class. But what does he care. He’s not a public servant. He works for the banks. That’s why the Fed’s monetary policies reflect the goals of the investor class. Bubblenomics is not the way to a strong/sustainable economy, but it is an effective tool for shifting wealth from one class to another. The Fed’s job is to facilitate that objective, which is why the economy is headed for the rocks.

The free market is a sham to conceal the crimes of the rich. Read Taibbi. Read Marx. Karl, not Groucho.

The financial meltdown is the logical outcome of the Fed’s monetary policies. That’s why it’s a mistake to call the current slump a “recession”. It’s not. It’s a planned demolition.