The French environmental group ‘Eau et Rivieres’ says that almost 70,000 cubic meters of seaweed has to be cleared off from 70 beaches every summer in Brittany.

The Lannion hospital in Brittany has said that the hydrogen sulphide is as dangerous as cyanide. The hospital has already treated many cases of poisoning caused by the seaweed among local residents. This included one council worker who was paid to clear beaches of algae. The woman was found in a coma. (Full article: Here) 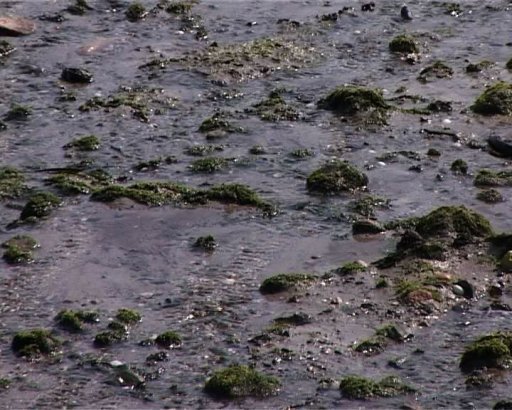 SAINT-BRIEUC, France — Mounds of putrified green algae are building up on France’s northern coast, releasing poisonous fumes blamed for the recent death of a horse and the collapse of the rider.

Part of the coastline has been declared off-limits as local authorities acknowledge they are unable to get rid of the decomposing seaweed that has washed up on shores in more than 80 communities across Brittany.

Green groups accuse President Nicolas Sarkozy’s government of turning a blind eye to an “environmental cancer” caused by the algae and blame intensive farming for producing nitrates that feed the seaweed’s toxicity.

Veterinarian Vincent Petit lost consciousness and his horse collapsed when he slipped on a patch of rotting algae near the beach of Saint-Michel-en-Greve on July 28.

The horse died almost instantly and Petit was pulled to safety by a crew of workers who happened to be nearby.

The veterinarian has since threatened to sue local authorities for reckless endangerment, raising alarm in a string of coastal communities in Brittany’s Cote d’Armor region.

“The death of the horse may be the opportunity to get things moving so that finally, something is done,” said Rene Ropartz, mayor of Saint-Michel-en-Greve.

Some 400 people turned out Sunday for a rally on the town’s beach to demand action from the government to deal with the green algae problem once and for all.

Already this year, the town of 500 souls has spent a paltry 150,000 euros (212,000 dollars) to clean up the algae and that effort is floundering over the growing masses of the nuisance.

“Two or three years ago, we would collect a maximum of 21,000 tonnes of algae. But this year, we are going to beat those records by a long shot,” said Ropartz.

Yvette Dore, mayor of the nearby town of Hillion, said clean up operations had yielded in early August the same amount of green algae usually collected by the end of October.

The problem has plagued the area for more than 30 years but local leaders say more green algae has washed up this year and new territory is being invaded on the Atlantic coast.

The green algae develops in shallow waters such as the wide bays in Brittany, fed by the farm chemicals seeping into the water.

Environmental groups say the onus is on Brittany’s farmers, mostly pig raisers, to take action to prevent nitrates from polluting the water.

The group Eau et Rivieres de Bretagne on Monday accused the government of ignoring the algae problem and said shutting down beaches was not the answer.

“Everyone knows that only a major reduction of the use of fertilizers and other nitrogen chemicals will result in a lower green algae tide,” said the group.

Local doctor Pierre Philippe said fumes from the seaweed can be noxious in some cases depending on the state of putrification. His advice is to stay away from them.

“Up until now, it was not a major problem, other than the cleanup and the cost of those operations,” said Joel Le Jeune, mayor of Tredrez-Locquemeau.

“But now the safety of people and animals is at stake.”

Le Jeune decided to bar access to a strip of 200 metres of coastline where the green algae is thick and potent. Due to the rugged terrain, workers had been unable to clean up that area.

But Dore, the mayor of Hillion, insisted that locally-elected officials were powerless to deal with what she described as an agricultural problem, saying the matter went far beyond their jurisdiction.

The green algae has also been bad for business. Mario Scotto, owner of the last beach hotel in the village of Saint-Michel-en-Greve, blames the foul-smelling seaweed for the drop in tourism.