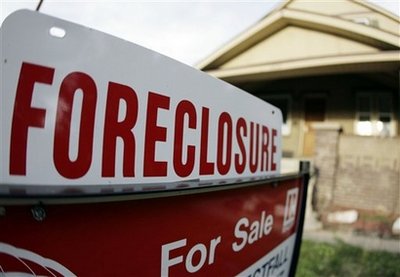 WASHINGTON – The number of U.S. households on the verge of losing their homes rose 7 percent from June to July, as the escalating foreclosure crisis continued to outpace government efforts to limit the damage.

Foreclosure filings were up 32 percent from the same month last year, RealtyTrac Inc. said Thursday. More than 360,000 households, or one in every 355 homes, received a foreclosure-related notice, such as a notice of default or trustee’s sale. That’s the highest monthly level since the foreclosure-listing firm began publishing the data more than four years ago.

Nevada had the nation’s highest foreclosure rate for the 31st-straight month, followed by California, Arizona, Florida and Utah. Rounding out the top 10 were Idaho, Georgia, Illinois, Colorado and Oregon. Among cities, Las Vegas had the highest rate, followed by the California cities of Stockton and Modesto.

While there have been numerous recent signs that the ailing U.S. housing market is finally stabilizing after three years of plunging prices, foreclosures remain a big concern. Foreclosures are typically sold at a deep discount, hurting neighbors’ home values.

The mortgage industry has been slow to adapt to the surge in foreclosures. Many lenders have needed government prodding to get up to speed with the Obama administration’s plan to stem foreclosures.

The Treasury Department said last week that banks have extended only 400,000 offers to 2.7 million eligible borrowers who are more than two months behind on their payments. More than 235,000, or 9 percent, those borrowers have enrolled in three-month trials in which their monthly payments are reduced.

“The volume of loans that are in distress simply overwhelms” those efforts, said Rick Sharga, RealtyTrac’s senior vice president for marketing.