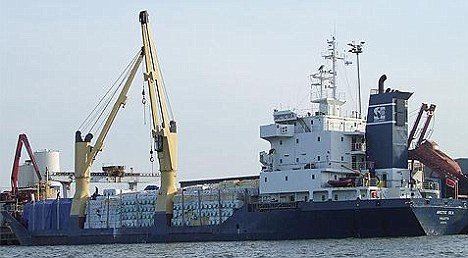 Disappeared: The Arctic Sea, shown here in a file photo, has vanished into thin air

The Russian Navy’s entire Atlantic fleet is searching for a cargo ship which pirates are suspected of hijacking before passing though the English Channel, it emerged today.

At least five warships and several submarines have joined the international hunt for the vessel which vanished along the Kent coast with a crew of 13 Russians on board.

The 3,998-tonne ship, which was also carrying £1million worth of timber, has not been seen for two weeks and it may now be in Africa.

The continent, particularly along the coast of Somalia, has been at the centre of an upsurge in piracy.

Dover coastguard say their last contact with the crew was on July 28 as the Arctic Sea – which was loaded at the Finnish port of Pietarsaari – prepared to enter the Channel shipping lanes from the North Sea.

The person who spoke to the coastguard told them in what appeared to be a routine call that the ship was heading for Bejaia in Northern Algeria where they expected to dock on August 3.

Mark Clark, of the Maritime and Coastguard Agency), said officials did not suspect anything untoward as a supposed crew member made radio contact before the ship made its passage along the Channel.

He said: ‘There didn’t seem anything suspicious when contact was made.

‘It could well be that a crew member had a gun put to his head by a hijacker when contact was made but who knows?’

Later in the day – July 28 – the coastguard in Zeebrugge contacted Dover coastguard to say there was an Interpol warning that the vessel had probably been hijacked by pirates.

The Arctic Sea was last recorded on a ship tracking system off the coast of Brest, northern France, at 1.29am on July 30.

Mr Clark added: ‘Who would think that a hijacked ship could pass through one of the most policed and concentrated waters in the world?

‘It seems strange to think that a ship which had been hijacked was passing along the Channel along with ships carrying daytrippers going over to Calais for the day.’

‘Under the orders of President Dmitry Medvedev all Russian navy ships in the Atlantic have been sent to join the search for the Arctic Sea,’ he said.

‘These ships include corvette Ladny and submarines.’

In a further twist, Swedish authorities said the crew had reported that the Arctic Sea was boarded by masked men claiming to be antidrugs police on July 24 in Swedish waters, near the island of Gotland.

The crew said they had been tied up in a 12-hour ordeal during which the men searched the ship before leaving empty-handed in a highspeed inflatable boat.

No further action was taken at that stage because the crew appeared to be safe and continuing their journey.

Spanish officials say the ship has not passed through the Straits of Gibraltar, which it would have to do to get to Bejaia in Algeria.

Kaimes Beasley, Channel Navigation Information Manager at Dover, said: ‘This is an unheard of situation for us.

‘I’ve worked here nine years and I can’t recall a case of a ship being hijacked by pirates in EU waters, let alone the English Channel.’

The Arctic Sea, originally called Okhotsk when built in 1991, is owned by Latvian-based Aquachart SIA and operated by Russian firm Solchart Arkhangelsk.