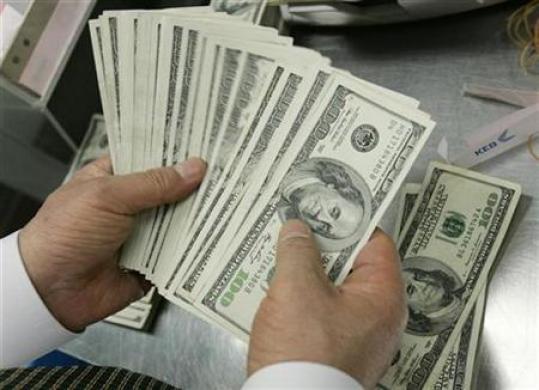 An employee of the Korea Exchange Bank counts one hundred dollar notes at the bank’s headquarters in Seoul February 24, 2009. (REUTERS/Jo Yong-Hak)

(Reuters) – Banks in the United States are poised to make $38.5 billion in customer overdraft fees this year, the Financial Times said, citing research by Moebs Services.

A large portion of the revenue is likely to come from the most financially stretched consumers, according to the paper.

It said the research showed that many banks have increased charges on overdrafts and credit cards in order to boost profits.

The median bank overdraft fee rose this year by one dollar to $26, the paper said, citing the Moebs data.

“Banks are returning to a fee-driven model and overdraft fees are the mother lode,” Mike Moebs, the company’s founder was quoted by the paper as saying.

Overdraft fees accounted for more than 75 percent of service fees charged on customer deposits, the paper cited Moebs as saying.

Last year the U.S. Federal Reserve approved credit card rules to curb “unfair” practices such as surprise fees and interest rate hikes, and new mortgage lending rules are expected this summer. It is also mulling rules to give bank customers the chance to opt out of overdraft schemes that can involve fees.

(Reporting by Ajay Kamalakaran in Bangalore; Editing by Greg Mahlich)